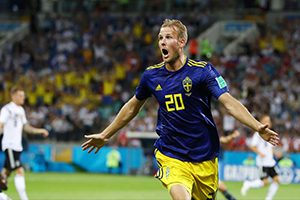 In total, these sides have met on 24 occasions, England winning 8 and Sweden 7 matches. The rest were draws.

Sweden were steady and patient against Switzerland and managed to beat them by a single, albeit slightly lucky, goal. Also, they now haven’t conceded a goal in five of their last six games in the World Cup.

England showed mental strength under pressure considering their previous record in penalty shootouts. The win against Colombia was their first ever win by penalties in the World Cup. This will give them confidence going forward.

There will be some changes in both teams. Lustig is out for Sweden through suspension but Larsson will be back after serving his. As for England, Alli, Vardy and Young are all question marks for the game on Saturday. This will give a chance to some players from the bench to play again.

From what we’ve seen so far, Sweden doesn’t play a particularly exciting style of football. However, the good execution of their duties makes them a team to respect. And as long as they carry on playing their game, who knows how high they might end up. Few expected them to get this far.

The goalkeeper Olsen keeps on impressing us, as does the defense in front of him led by Granqvist.Forsberg has finally scored, and even though it was a deflected shot, it would have given him a huge boost.

Sweden will go into this game knowing that they have a good record against England, having been beaten only once in their last eight competitive matches.

England are playing with confidence and ploughing on. They have a chance of going all the way and all that stands in front of them are the Swedes and then either the Russians or the Croats. If they manage to beat them, they are set for a final against Brazil, Belgium, France or even maybe Uruguay.

Fans in England are singing “It’s coming home” and it might, the trophy that is. England have certainly looked poised and calm under fire. Kane has scored six goals so far and will want to add to that, not just to win the golden boot, but to propel his team to a possible trophy.

The defense still leaves a lot to be desired, as they haven’t kept a clean sheet yet in Russia, but they will be confident that they can always score one more than the opponent.

Sweden will be hard to break. They are organized and cohesive. They have displayed great teamwork so far. England will have to find a way to get Kane some good chances. Scoring six goals is great, but three have been from penalties and there was that one deflection. Overall, England have struggled to score from open play. On the other hand, Sweden were great in defending set pieces so far.

England are favorites in this match since they have more talented players in their squad. And the draw is on their side. They will see a clear path to the final. Still, Sweden have managed to surprise us a few times this year. There isn’t much between the two teams, a moment of inspiration might decide it in the end.