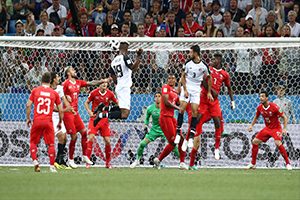 The two sides have played against each other a total of 27 times. Both teams have 10 wins each and there were 7 draws.

Sweden was heartbroken to lose against Germany but rallied together to thrash Mexico 3-0. They’ve won two games in a row in the World Cup only once, in 1958, when they were hosts. With goalkeeper Olsen in great form and a solid defense, the Swedes will try to be the ones making it to the quarter-finals.

On the other hand, the Suisse were lucky in the last game and could have easily lost the match. Still, while some may call it luck, others might call it hard work as Switzerland have shown grit to come back from behind in two games already. They will surely play with the same desire against Sweden on Tuesday.

After a somewhat surprising win over Mexico in the group stage, where they could have won 5-0 easily, the Swedish team is buzzing.

In 1958 Sweden were second and in 1994 they were third, but in all of their other appearances, biggest achievement was making it to the knockout round of the tournament. They will feel confident that they can go a step further this time and make it into the quarter-finals for only the third time in their long footballing history.

Sweden will miss Larsson through suspension, but Granqvist and the team will try to make up for his absence. Everyone is also expecting Forsberg to finally score as the Swedish star has struggled to find the net so far.

Quick out of the gates

Traditionally, Switzerland have a slow start to their matches. This time they stand across a team of similar tactics, so they might choose to come out of the gates furiously and surprise Sweden.

Last time the Suisse reached the quarter-finals was in 1954. They have a great chance of doing it this year. With confidence high in Shaqiri and Xhaka, as it is in the whole team, and with no pressure to perform a miracle, Switzerland may well join Russia and Croatia in being one of the eight best countries in this World Cup.

Lichtsteiner will be greatly missed by the team while he is serving out his suspension along with teammate Schär, while Svensson is expected to replace him. Rodriguez will have to take on the burden of leading the team in his stead.

Despite playing a few times against each other over the years, Sweden and Switzerland have never met in major competitions. This will be the first time.

This match has all the markings of a tight game until the final whistle, but Switzerland are slight favorites. They have looked more confident throughout. Looking at their form, a good bet might be a draw and extra time, followed by penalties. However, Switzerland have a knack of snatching late goals in this World Cup so far.