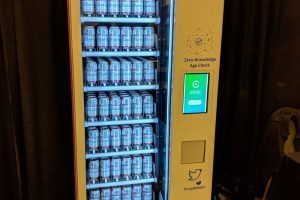 A single company has recently been able to get some eyeballs on its project even though it is a small venture in the overall cryptocurrency domain. The success, at least in the marketing sense is derived from its ability to actually interest people in a way that companies rarely do in this industry – it provided a practical product.

In this case, the product is a vending machine that is able to accept cryptocurrency payments. For many in the crypto community, especially developers working on much more serious systems, this might seem a very trivial element. After all, ATM machines that use digital currency features have been around for some time. The same goes for the bitcoin machines that are not even ATMs but something of a hybrid device that allows for the cryptocurrency to be withdrawn from a digital wallet in the form of fiat currencies.

Yet, Civic is very serious about its potential and the entire line of vending machine products. Additional information also points out to the option that the same venture really does hold some important new possibilities at its disposal, some of which could be excellent news for the wider ecosystem.

The story of the Civic’s journey began with the beer-selling machines that they presented at the South by Southwest 2019 festival. As a decentralized identity startup, the company showcase three vending machines on SXSW that were swelling two types of local beers from Texas. While a beer-vending machine was not that impressive as a concept, it had two features that made it both unique and very interesting.

Firstly, it could take payments in crypto but secondly, it was able to verify the user’s age through the same tech. A single machine was priced at $15,000 and even back then they were available for pre-orders. The same was presented by the company itself – according to its representatives, the basic desire of Civic was to merge payments and identity checks into simple transactions.

In the world of esports, digital media and on-the-go lifestyle, it is clear that this idea would have a lot of traction in many different quarters. At the festival, the machines sold about 150 units a beer per day. Roughly, this ended up being over $7,000 in sales at the same event.

The company operates the entire setup using their CVC tokens. At SXSW, these were airdropped to the guests by the company itself. A single serving of beer had a price tag of 200 CVC which was roughly about $12. Mobile phones were used to download the Civic Pay application and then verify their identity. From there, they would use a QR code for the machine to notify their wallets about the payment and then get the beer while the blockchain checks their identity.

This was the first actual test in the general public of the Civic’s scheme to check the identity and it works exceedingly well. Previously, the company demonstrated the app’s ability to verify age and then, later on, its potential for making sales and transactions. However, it was at SXSW that the fully rounded up concept was demonstrated and the same process went through without a hitch.

After the successful demonstration, the company went to work to monetize its newfound media attention. In no time at all, the company announced it created partnerships with 12 big automated retail companies. In fact, the deals are a huge accomplishment of Civic concept. The 12 partners are now controlling over a million vending machines that are connected to the internet.

Civic’s technology will be used at more than a thousand machines before the end of this year. When it comes to verification of age, Civic’s machines will scan the document of the users to confirm both the age and the identity. Another option is using the knowledge-based system for authentication, which would include a series of questions that a person would know how to answer in case they are of legal age. Civic will leave this option open to those vendors who prefer it.

The Civic Pay app is supposed to use the stablecoin solution. These do not come with the volatility of the regular cryptocurrencies and these include the CVC token itself. It offers a range of benefits that would likely appeal to the ordinary user who is not a cryptocurrency enthusiast.

The same stablecoin option would also be a big benefit at those moments when vending machines are not using age verification of any kind. The participating merchants, in that case, would attain stablecoin payments but also a much lower transaction fee.

The company is looking at using tobacco, hemp-related products, and alcohol beverages to establish its product in the automated retail domain. Further on, the use of Civic Pay as a means of dodging any transaction fees could push the same company into even more domains. Its representatives are hoping for one particular field of industry – pharmaceuticals. Medicine is usually not age-gated but still provides a range of products that are verification-based.

These could be, for example, asthma decision, prescription antihistamines or insulin. Civic could provide the same identity checks. This is today completed by a visit to a brick and mortar pharmacy, but the company envisions a future when this might not be necessary. However, moving into this domain would require much more than simple technology and the company is well aware of that.

The successes of Civic’s ventures are clearly bound to continue. However, they also showcase the potential of a merger of these two new and rising technologies – blockchain and smart vending machines. Both will clearly be a force to be reckoned with in the future and by merging them together, the success seems inevitable.

It will have its share of bumps on the road, especially when it comes to age verification but the path towards the ultimate goal of having smart vending machines that use blockchain to its highest potential is in the sites of many companies. It is sure that not only one of the will attain huge rewards in the same field.