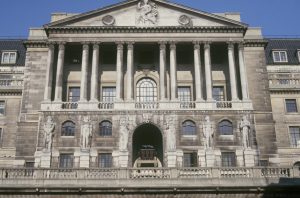 For almost half a millennium, banks were the cornerstones of the financial and economic systems. Rivaled only by official national treasuries, these financial institutions go so far back that the modern age and life is almost unthinkable without them.

Even in those exceedingly different social and economic setups, like in communist nations where there is no free market, banks still exist and operate. But, their importance has naturally lead to many banks to end up in a position where they can influence the markets and the entire economies.

This almost monopoly-like position was one of the reasons why cryptocurrencies came about. But, at the same time, the certainty remains that any financial domain, digital or otherwise, has to possess some kind of bank or bank-like element. Here is an overview of this issue and the reasons why it is so important to assess whether or not banks belong in the cryptocurrency domain.

Today, the financial institutions people colloquially call “banks” are usually conglomerates of different business entities which provide a huge range of services from this domain. For most, the actual banking mechanisms are so convoluted and complex that many simply have no idea what does actually transpire in banks.

At the same time, everyone in developed and developing nations is using banks because physical money is slowly but surely being phased out. In many ways, not having to deal with paper money is something any business wants on some level from the perspective of its effectiveness.

The savings of not having to handle and distribute paychecks in physical form is enough for many business owners to slowly move towards a full digital, bank-enabled financial system. Ever since this possibility came about in the late 20th century, the world has gradually shifted in the direction occupied by big banks.

However, while there is no denying their effectiveness compared to the old-fashioned physical ledgers and cash transactions, they still are behind digital-first financial services. Like with eSports and social media, native apps usually win over any modified off-line concept, which is true for the financial system as well.

A Better Means of Bankings

The argument for creating crypto banks is that the banking sector can be enhanced if it moves to the crypto domain. As the digital transaction improved the effectiveness of the old banking cash-based banking system, so could the blockchain-based technology revolutionize the banks.

For most crypto enthusiasts this idea is something that has been in the works ever since the cryptomarket began. But the problem is that many of the same individuals and like-minded companies, crypto banks would function just as their name suggests – in the crypto domain and be completely disconnected from the traditional financial system.

In practice, the crypto sphere can provide many elements of the banking structure, like loans. Many regularly use bitcoin for things like online BTC betting, but there are also many individuals who employ it for things like loans. But, while it is possible to get a loan in bitcoin, there is still no clear possibility of having an entire bank basing itself on bitcoin or any other cryptocurrency.

Thanks to the fact that the interest goes both ways, the traditional banks are looking into their possibilities of using some cryptocurrency elements. Here, the blockchain tech is something many find fascinating in the banking sector.

It does not take too much imagination to see how a bank could apply the distributed ledger principle to increase speeds of transactions, make them more secure and also allow them to cost less. This would be something that translates itself immediately into higher profits and a more competitive offer when compared to any banking competition.

But, years have passed since banks began experimenting with their blockchain systems. Currently, many are still doing the same and even expanding their projects. Yet, the fruits of these efforts are still waiting to be seen and many wonder whether or not the blockchain tech can be easily embedded into old-fashioned systems.

The effort will certainly continue, but so far the safe bet is that blockchain cannot be a plug&play app for the regular banks. A custom solution will need to be developed and this instantly takes a dent in those profit estimates.

The markets on both sides of the banking divide are entrenched and well-defined. Right now, with the current level of tech and experience, no one has managed to bridge the divide easily. There are no full-crypto banks and the traditional banks have not merged blockchain into their systems.

But, there are still those who are developing novel solutions that actually serve as a means of providing a hybrid model. These solutions are concepts that use both the elements of the traditional banks and the cryptocurrency procedures.

The ethereum proof-of-stake is one such concept. It provides the option of the network moving away from the proof-of-work, where hashing computers are used to support the ethereum and moves onto a digital-only process.

With this second option, the tokens of the users are put inside of digital vaults where they actually replace the rigs used for mining. At the same time, the users are reimbursed for their stake in a form that is very similar to a savings account. Over time, as long as they keep the same ETH in place, they get compensated in the same cryptocurrency. In many ways, this concept is identical to the idea of the traditional banking savings process.

Here as well, the users provide a system with some value and the system reimburses them for it. In traditional banks, the money from the users who go the savings is employed by the bank and invested in their portfolio.

In ethereum’s proof-of-stake system, this occurs and the only difference is that the staked value comes in cryptocurrency. However, it is a good example how the cryptocurrency bank concept can continue to be developed. While it might provide digital banks in the traditional sense, it will definitely provide something of value for everyone involved.