Opinion The Cryptocurrency Market and the Trump-Kim Summit 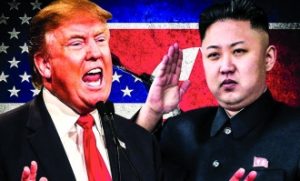 The meeting between the North Korean Kim Jong-un and the US president Donald Trump is going to be one of the biggest diplomatic summits after the end of the Cold war. The meeting of the two leaders will signal the first such contact since the founding of the Democratic People’s Republic of Korea more than 60 years ago.

The diplomatic implications are huge and the eyes of the world will be on the event taking place on Sunday, June 12th in Singapore. Thanks to this, naturally, the markets are also closely following the entire venture, even days before it is set to begin. The same goes for business leaders, some of which have a lot of riding on the process, especially when it comes to parts of China that have standing deals with North Korea or are somehow else connected to its geopolitical outlook.

But, at the same time and away from the limelight, the crypto market is also taking notice. While it might not seem that way on the first glance, the cryptocurrencies of the world, especially the big ones like bitcoin, will be impacted by the results of the summit and potential further diplomatic development. Here are the major implications about the state of the cryptocurrencies and the 2018 North Korea–United States summit.

The summit is being organized at the end of a period of huge tensions between the US and North Korea. Under the leadership of Kim Jong-un, the country has managed to quickly expand its military capability. This was seen in several successful nuclear tests, but what worried the international community, even more, where the ballistic missile tests.

The country went through a range of ICBM launches, some of which were successful and which caused panic in Japan and South Korea. For the first time in history, North Korea leadership had both the nuclear capacity and the delivery means of attacking not just its neighbor but also distant Japan and even more distant Hawaii.

The response of the US administration was equally harsh, with the diversion of a carrier group towards the same region and an endless stream of hawkish statements. The US president even promised to rain down fire and fury against the country and its regime. North Korea fired back with its own tough rhetoric. For some, at one point in the exchange, some form of conflict seemed inevitable. Luckily for everyone involved, the showdown, even a limited skirmish, did not occur.

For some analysts, the reason why there was no conflict lies in the fact that the strategic positions on the Korean peninsula are so entrenched that it could be said that a micro-Cold war is happening there. In other words, any military action by the US would lead to a lightning-fast escalation from which an all-out war would be the only option.

The setup is this: North Korea has nuclear bombs, but more importantly, it has an incredible array of conventional weapons, much of which is entrenched on the border with the South. If given the order, a countless number of short-range missile launchers, artillery batteries, and even regular small mortar teams would begin firing into the South.

The South Korean and US border posts would be saturated with the artillery fire, but so would be Seoul, which is very close to the border itself. By some estimates, the city would be in ruins in hours and no amount of countermeasures by the South Korean army would stop the guns completely.

As a metropolitan city, Seoul is densely populated and houses many US nationals, just like the US military has a presence of almost 20,000 troops in South Korea. The casualties among all of them would be huge, even if the North has many more of its soldiers killed in these opening strikes of the war.

Neither South Korea nor the US has the capacity to preemptively stop this scenario from unfolding. The adding of the carrier group would not change this, being that the border is simply too militarised by the North to stop all of the gun positions before they can rip into Seoul.

And then, there are the North Korean nukes. Clearly, even in this simple strategic overview, any military commander saw that this fight would quickly turn into a bloodbath. The military option disappeared from the public discourse just as the tension began to dwindle between the US and the North.

Now, after months of odd diplomatic processes, the summit is going to happen. Weirdly, but not surprisingly counting the fact that Dennis Rodman was one of the people working towards this goal, there are no set talking points.

Instead, the two leaders are embarking on something of a meet and greet process where they clearly both expect to get to know each other. The others in the process, especially the South Korean government, are really determined to find a way to de-escalate the tensions and find a way to work with the government of the North.

This is why the end results are anyone’s guess. Some analysts even point out to the fact that the summit might still be called off.

From the cryptocurrency perspective, the main goal of the summit is aligned with South Korea point of view. With the tensions dying down, the economy in the South will pick up once again, giving the crypto market a chance for a new boost in adoption and profits.

This would then help exchanges and other crypto ventures in the country to strike a deal with the regulators and find a way for the industry to keep growing once more. Naturally, if the summit fails, there will be an economic consequence for that as well.

Yet, it appears that the negative political news is the MO of the recent years in South Korea. This is why most believe that the world’s capital of eSports and other digital ventures will come through even if the summit is an abysmal failure.

Currently, the global crypto markets are static and in expectation of the changes in regulation in the US, South Korea, and other relevant nations. The summit is a part of the global geopolitics but it is hard to gauge its ability to directly impact the market.

Today, the old dynamic of “bad news for regular markets, good news for crypto markets” is no longer true. However, it is safe to say that the successful summit will be a well-received development for the global security.

This will, in turn, impact global trade and investment, including the crypto domain. This is why even those in the cryptocurrency sphere are probably hoping the 2018 North Korea–United States summit ends with positive results.