Opinion The Emerging VR Industry and the BitCoin Ecosystem 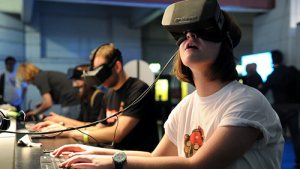 In the last three decades, there have been at least two separate occasions when the virtual reality software and hardware setups have been declared “the next big thing”. Since then, all of these have failed in one way or the other, leading to a world of the early 21st century that is very much VR-free.

However, it seems that 2015 managed to do the unthinkable and finally anchor a few VR options that seem to be here to stay, even though it is, judging from history very risky to say this, including moments when things appear to be certain. The main difference is that now, there are several competing solutions which offer a top-to-bottom VR experience but do it in a different way.

Here, the main rigs come in the form of Samsung Gear and the Oculus Rift. These two solutions either have products on the shelves (Samsung) or are counting down the days until they ship them out (Rift). At the same time, many wonder if this VR ascendance could provide digital currencies like BitCoin with a great chance for expansion and profits.

While there is no doubt that VR has to become a planetary phenomenon sooner or later, the timing for any VR investment or wider financial interconnectivity with these endeavors is not so clear. Here are the key points about different angles to the issue of BitCoin and the VR industry.

In some ways, it might be said that BitCoin missed out on the first round of VR industry development and growth. Current solutions began their development several years ago and the money came from venture capital funds or through massive crowdfunding campaigns. In this round, there was simply no room for a digital currency to make a big impact, especially because all of these were developed in the western nations where procuring funds through traditional channels was not difficult.

But, it has to be said that the current generation of devices came about when the BitCoin network only started to get noticed. While this means that the window of the generation one VR devices has closed, the subsequent generations and even new design and manufacture models could be developed using BTC investments.

Currently, it seems, the P2P network has very little to gain from any investors who would want to get either on the Gear or Oculus Rift projects. On the other hand, the individual ecosystems of these devices are quite different and there could be space for making money with some timely and smart BTC investments.

Samsung and the Light VR Realm

Samsung managed to get its device to the markets first, but it did this by sacrificing a lot of strong VR features. As an addition to their Galaxy range of mobile devices, Gear represents VR goggles that are used with the smartphone (the actual display for the rig). This means that the rig represents a lot less VR potential and has most to offer in the domain of VR-enhanced observations.

In other words, using Samsung VR is a lot like enjoying 3D environments with limited interactivity. This makes is great for virtual reality passive experiences, including pornography, but a lot less impressive when it comes to games and similar apps.

Aside from that, it appears that Gear will not shake the foundation of the future VR industry.

The Power of the Oculus Rift

Unlike the Samsung Gear model, Oculus Rift is all about the power and the performances. A native VR device, it was developed meticulously over the last several years and in the first half of 2016, it will begin to be shipped out as a standard consumer model. But, the so-called dev kit was distributed some time ago, allowing game developers to make VR releases in a huge range of genres, from survival horror to sports simulations.

But, unlike Samsung Gear, Rift is both expensive and niche-oriented. Its ecosystem will be a lot smaller, but niche groups, like E-Sports players, will embrace it for certain. At the same time, developers will continue to crunch out video games. Here, BitCoin could be used to fuel video game development companies in the developing countries, especially lean teams that can provide a big ROI.

Additionally, a partnership of a social BTC-based game inside of a VR environment could have a double novelty factor that would drive both partners forward. A chance for profit would entice people to buy the Rift devices while the growth of the user base would increase the profits of this type of social VR game.

In spite of these advantages that Oculus Rift possesses, its small projected numbers of early adopters will hinder any large expansion almost certainly in the first couple of years. So far, BTC made the most gains with big user groups, for example, people who desire to bet online using this currency.

According to all experts, 2016 is a big year of VR. Here, not only the two biggest devices will make their appearance, but smaller companies will also use the global interest to present their products. These will find their way to the consumers and the final thing to be seen is how high the daily engagement rates will rise.

Currently, the factor of nausea remains strong and worrying. This is due to the fact that some people begin to feel a form of motion sickness when they wear any kind of VR device. The phenomenon occurs because the body of the person is telling them they are stationary while their eyes are showing them they are moving.

The problem could slow the growth rates for VR users but still, it will not kill the expansion. Investing BTC in the domain seems like a smart move and the users, primarily because of their age and interests should be open to using a digital currency. This idea is based on the modern user segmentation theory, but it has to be said that there were instances where the same failed miserably.

But, it should be mentioned that neither of these seems like a sure thing and all remain risky undertakings. However, the potential of VR will be tapped in this decade for certain, so those with adequate BTC means should perceive the same industry as a great domain for a smaller but long-term investment.