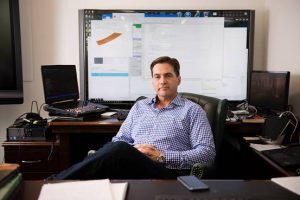 A couple of years ago, meaning not that long – or very long ago in terms of cryptocurrency community, even the 10-year-old bitcoin (the oldest in the bunch) a person came out claiming he is Satoshi Nakamoto. This meant that he was the person who creates the most popular cryptocurrency in the world and his name is Craig S. Wright.

This Australian tech professional was completely serious about his claims and he further insisted that he can prove that he is the same person. However this promise never really came through and this led to a series of conflict that is continuing to this day.

Currently, the reason why he once again returns to the limelight (which he does not shy from) is a legal case going on. This conflict began brewing some time ago and it includes an outspoken member of the community gathered around bitcoin and this controversial computer science. The story is a complex one but it basically breaks down to the fact that Craig S. Wright is sending legal letters to all those prominent members of the community that have labeled him a fraud. The story begins ever before that in late 2015 but it still shows no sign of stopping.

In late 2015, Craig S. Wright came out as a Satoshi and a big name in the bitcoin ecosystem back then, Gavin Anderson, lend his backing to this unmasking. However, security experts back then started rebuking his claims, which left many in the crypto community more than unconvinced. Yet, in spite of this, Wright has maintained that he is Satoshi and those who do not believe him continue to call him a liar. The latest one of these came from Hodlonaut, who is a bitcoin user under a pseudonym that creates the lightning torch experiment.

He used his influence in April to again castigate the same computer scientist. Soon after a series of tweets from these users, Wright sends out a letter to the same person, arguing that his claims are damaging his reputation. This is according to Wright libelous and calls for legal action. It is likely that Wright wanted to use the legal threats to divert attention from himself and his claims. However, the exact opposite happened with many in the community coming out in support of the bitcoin enthusiast.

A huge new wave of additional community members came out to call Wright a fraud. Peter McCormack is a bitcoin podcaster and he did the same – a legal letter from Wright arrived and demanded he publicly apologizes. Instead, McCormack stayed defiant, saying he will fight the legal case in court and once again argued that Wright is not the person who created bitcoin. He even went a step further and declared that he could, just like anyone else, claim to be Satoshi Nakamoto.

It could be argued that Wright is sending out a legal letter to vocal elements in the bitcoin community but not actual developers. Adam Back’s case, who is the CEO of Blockstream shows a different picture. He also got a legal letter.

The industry wrath is moving even further with CEO of Binance saying Wright is a fraud and even deleting bitcoin SV cryptocurrency with his backing from their exchange. Shapeshift is doing the same while Kraken created a poll for their community about this issue.

Person Behind the Name

Craig Wright came to his moment of fame at the end of 2015 when Wired and Gizmodo published an article that details how he could be the person behind bitcoin and its early creation. The Satoshi Nakamoto disappeared from the public scene in 2010 and there were several media initiatives to find who he is.

After that, numerous publications like the Economist and the BBC again profiled Wright and the efforts to make him into the creator of this cryptocurrency. Wright played into this as well, publishing a blog post where he features a signature that was connected to the ninth mined bitcoin block. However, there were several huge waves of cryptocurrency experts rebuffing his claim and leading to his label of fraud in the bitcoin community.

Among his bitter opponents is Vitalik Buterin, the creator of ethereum. He was willing to publicly call him a fraud at a conference. In the age of esports, social media and other fast-moving data, it seems that the sides are clearly set in the case of Wright. It did not take long for the same demarcation to happen.

Recently, Wright once again entered the limelight but this time in a developer role, so to speak. He was one of the main supporters of the already mentioned bitcoin SV, where the two letters stand for Satoshi Vision.

This cryptocurrency came about from bitcoin cash after it forked away from the main bitcoin network in 2017. However, the vision of this cryptocurrency seems to be in as much trouble as Wright’s idea of defamation.

Right now, only McCormack revealed the full content of the letter he received. It calls for the deletion of problematic tweets and a public apology. But many are wondering what actual legal mechanism does Wright and his legal representatives wield if this case arrived at an actual court?

Hardly, being that Wright himself cannot prove his claim he is Satoshi. This means that anyone claiming he is lying is as right or wrong as he is. Most in the crypto domain believe it is a means of trying to pressure people to look the other way. Others do not care and are already rallying around his accusers. We Are All Hodlonaut, a legal fund for the defense of the same individual raised $20,000 in a single day. Currently, it has near to $30,000 with over 1,000 supporters.

Interestingly enough, most of the contributions came via the lightning payment system. Preston Byrne, who is a lawyer and active in the cryptocurrency domain, revealed that he is assisting the same person pro bono. If the measure of a person is their friends, it seems that Hodlonaut has more value that likely Wright and his legal team expected. Others have a simple message: Wright seeks nothing more than attention, so he needs to be fully ignored by everyone in the crypto community.