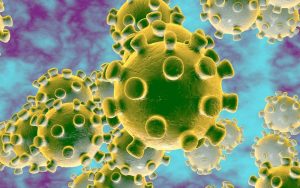 The spreading of the new strain of coronavirus brought about a new wave of fear among different investors across the globe. This triggered a sell-off among the traders in the stock markets and a flight towards safe havens for now-liquid assets. These havens include US Treasury bonds and gold, all riding on the news that almost 50 countries in the world report infections. The same is followed by the realization that the virus is spreading even through infected individuals that show no symptoms.

Because of that, the sell-off was accompanied by many reports of shipment delays, travel cancellations and general business interruptions with no end in sight for any of them. In the US, the stocks fell for the six-day straight at the moment of writing this. Treasury yield also fell to a record low return. However, at the safe haven side of the specter, the price of gold moved closer to the seven-year high and bitcoin price rose by 1.4 percent, along with other popular and sought-after cryptocurrencies, especially ethereum’s token ETH.

Then, all of the crypto tokens also fell in price. Add to this the common narrative before this crisis that the world is sliding towards a recession and there is a clear notion that some exceedingly heavy clouds are rolling beyond the horizon.

Economic Price of a Pandemic

Goldman Sachs analysts focusing on Wall Street recently warned that the world is on the brink of a serious industrial issue. The coronavirus is threatening the supply chains feeding global factors, slowing the output of China and dampening the overall global demand for any kind of goods. This is happening not just in the US, but all over the world. The firm also issued a warning about the possibility of the virus to wipe out any possible or present growth in the major companies everywhere in the world. The firm also took measures to include the likelihood of the virus becoming a global pandemic into their earnings models.

Other institutions are equally pessimistic about the possibilities of the virus in the near future. Bank of America is certain that the virus has tightly gripped the global markets. Interest rates that are close or at their historic lows are under further pressure. The same is true for the negative levels in Japan and Europe, while the remedy for all of this resides in China. Until its own economic activity dramatically improves, there is no chance that the global outlook will be any different. In all of this, the impact on the already very unstable US domain seems to be most relevant as a gauge that will show where the chain of events will lead next.

Politically, one of the most endangered leaders globally is US president Donald Trump. If the US economy tanks, he will be the one behind the wheel when that happens and the same could drastically if not completely impact his hopes for the second term. This is even more pronounced because of the fact that right now, the most likely counter-candidate will be Bernie Sanders and his drastically different political and economic narrative.

This is why Trump is adamant to try and stave off any possible huge economic problems for the US. To do the same, he publicly called much of the coronavirus fake news where the media outlets are trying to blow up the dangers of the virus. With that, Trump suggests, they are trying to induce a panic in the markets. At the same time, Vice President Mike Pence was delegated to be in charge of coordinating the response of the US government to the virus outbreak.

Like esports and any other fast-moving venture in the age of information, the crypto market did not take long to react to the coronavirus. Earlier in the week, after a slight rise, the bitcoin price dropped almost simultaneously with the traditional markets. This led many to question the wisdom that the money that is freed from the traditional markets quickly looks for new safe havens. In theory, bitcoin should be one of those havens where a crisis of any kind is followed by a panicking movement of cash towards those destinations.

Here the same did not happen so far. Some are openly claiming that bitcoin is completely uncorrelated with any other asset like bonds, stocks or energy markets. Instead, it appears to operate, at least in short-term on its own principles and inside of its own dominion of influences. The problem is that many of those influences remain a mystery and the same applied to the coronavirus as well.

However, in spite of the fall in the bitcoin price, there is the issue of the slow and gradual establishment of the crypto market as a stable construct. Yet, it might be mysterious in many ways and its movements not as clearly understood as those of the traditional markets, but the fact remains that gradually, those voices that have been calling bitcoin a scam have melted away. Instead, critics turned to instability and odd behavior, citing those as crucial problems. In many ways, this is not senseless criticism.

Yet, the key point here is that the voices explaining how bitcoin will crumble into nothing still have to wait for a bit more for that to happen. Because of this, the notion of one percent is becoming more and more prevalent. According to that idea, as the traditional markets find themselves in more and more pressure, or even in an all-out recession, their capital will look for alternatives. In the short term, it appears that crypto is not high on the list, but being that it is also no longer seen as a doomed enterprise, it will get its turn.

The one percent means that many projections see global investment wealth allocating this amount of money for the crypto markets. When this occurs, the current market cap would be blown out of the roof and crypto would be just another financial asset. The present coronavirus-fed possibility of a recession is pushing more people into crypto, but with that, it is also pushing the one percent scenario closer to reality.