Industry News The NTFs and Crypto Gaming Trends of 2018 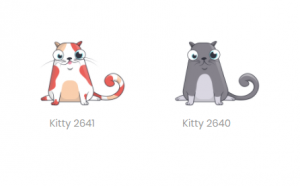 2018 has been a volatile year for cryptocurrency and digital currency of all kinds. While the price has been swaying all over the place and going mostly down, there has been a lot of development on a completely different side of the blockchain technology – the non-fungible tokens or NTFs.

These tokens are also direct products of a blockchain network, but unlike regular cryptocurrencies, like bitcoin, for example, these are not interchangeable or identical to one another, apart from being distinctive and not open to being multiplied. NTFs are digital assets that are unique and open to additional programming. They are mainly used for crypto collecting games and similar ventures where users attain unique and non-fungible elements that they can then use inside of an application or trade with them, like in the case of the famous CryptoKitties that started the entire trend of crypto collecting ventures.

Far from the limelight, 2018 was an interesting year for NTFs and it also shows to point to many more interesting things that are yet to come. Here are some of the most important trends related to crypto games that made this year and that will most likely define the same field in 2019.

NTFs came this year with a range of possible options on how an app can construct game assets. However, for one token to be able to “talk” with another one, there has to be a set of standards that both tokens can comply to. On the ethereum network, the ERC-721 was developed for the same purpose and evolved over 2017. Today, it remains to be widely used and additional standards like ERC-998 allowed for things like tokens owning their own tokens and thus saving on gas expenditure.

Standardization is in everyone’s interest so it can be expected that the same process will continue into 2019 and beyond. This, connected with the so-called second-layer development where anyone can use the current “games” and create their own unique content on top of them also show that there is a lot of resilience in the same domain when it comes to its sheer development appeal.

CryptoKitties is the app that launched NFTs in the limelight and which offered an insight into a possible killer app for the same field. Since it came about, NFTs token began appearing on places like RareBits and OpenSeas which allowed users to sell their in-game assets outside of the actual game environment. Additionally, tools like FanBits now allow users to create their own designs and concepts for unique digital assets.

Right now, these have failed to generate a lot of interests and potential investors being that there is a clouded sense of their value and worth, similar to numerous ICOs. But, as long as they stick around there is a solid chance that they will gain in value – essentially even the bitcoin did not go through a different process.

Artistic platforms were one of the first to recognize the fact that user-generated market is a promising idea. In 2018, a range of these opened up and started working by producing digital assets that were authentic. Unlike with the traditional and physical art, the artists behind these works could earn fees from the secondary-market sales or anything else that can be attained by the programmable self-activating token contracts.

NFTs in 2018 attained some record-breaking sales of assets. These included a card from Gods Unchained that went for $60,000. While this game hopes for a shot at releases like Hearthstone or even maybe a shot at becoming the first card-based blockchain esports, the sale is still remarkable. In Decentraland, a piece of real estate was sold for $200,00 and a CryptoCat asset got $170,000. The sales show that there is a market for the same assets and that occasionally it can produce huge profits for the developers and token-holders.

At the start of the year, CryptoKitties launched their celebrity kitties with the NBA superstar Steph Curry first in this lineup. But, this resulted in some threats of lawsuits and breaches of NDAs, showing that this phase might be more complex than it seems. However, in spite of this, there is a certainty that the mixture of crypto gaming and celebrities is only just kicking off. 2019 will almost certainly bring about many more instances of these two fields mixing and interacting.

Most analysts agree that this game, backed by none other than Coinbase is brimming with potential. This game should appear on the market in 2019 and it clearly has a lot of appeal behind it that seems to be targeted in the right manner. Card collecting and potential for profits have always been adjacent factors and this game should provide the same feel and potential.

In theory, it could attract millions of players with ease if the creators apply their marketing efforts for the right focus group. What is also interesting is the fact that every time a player buys a card pack, the funds are forwarded to the tournament prize pool. Right now, this yet-to-be-published game has a prize pool of over $300,000. For comparison, Clash Royale, an established mobile esports with over 100 million active players had a prize pool of 2018 that is just $240,000.

Making any kind of prediction related to the crypto domain is a tough business. However, examples like Gods Unchained show that gaming is actually one of the more stable crypto venture thanks to its numerous direct advantages that are not connected to token price (or even having tokens on any kind of fiat-to-crypto exchange). This provides crypto games with a potential that is simply waiting for the influx of players and this is a strong precursor to astronomic growth.

There are a lot of moving parts in that possibility and it would not be something that can be attained quickly or suddenly (which is a pleasant surprise for crypto). Yet, there is no denying that 2019 could see the appearance of a killer dapp on the market if not in Gods Unchained than in some similarly ambitious application.