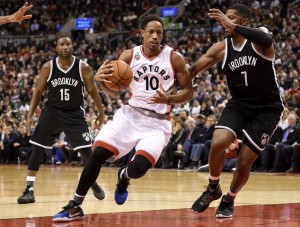 Following a surprising 107-113 loss to Houston Rockets, Toronto Raptors welcome Brooklyn Nets at their Air Canada Centre. Nets are considered big underdogs in Tuesday’s clash, but it remains to be seen if they are capable of upsetting the Canadian outfit.

Toronto Raptors have been producing thrilling displays at their Air Canada Centre this season and that is the main reason why they were regarded as favourites in Sunday’s match against Houston Rockets. However, James Harden scored 40 points for Rockets and he helped his team put an end to Toronto’s 12-game winning run at home. Dwane Casey’s troops are desperate to bounce back from the defeat and no doubt the hosts will take Tuesday’s match against Brooklyn Nets very seriously. Experienced power forward Luis Scola scored 21 points for Raptors in the loss to Rockets, meaning that Nets could find it hard to contain the 35-year-old Argentine player. Anyhow, DeMar DeRozan, who scored 24 three throws in the 117-115 win over Portland will be the man to watch in the home team. DeRozan is averaging 23.4 points this season and you should have in mind that he enjoys playing against Nets.

The likes of Lucas Nogueira, Jason Thompson and Delon Wright did not play against Houston Rockets (coach decision), but the trio should return against Brooklyn.

Brooklyn Nets have been struggling in the 2015/2016 NBA campaign. The club chiefs decided to sell key players and their decision is proving fatal for Nets. The Barclays Center outfit have recorded no more than 18 wins this season, while suffering 45 defeats and they certainly face an uphill task in Tuesday’s match against Toronto. Interim coach Tony Brown saw his men suffer a 132-118 defeat to Minnesota Timberwolves on Saturday and it has to be noted that the team conceded 100+ points in each of their last four games. Joe Johnson is no longer part of the team and seeing that Nets have already suffered 23 defeats on the road in the 2015/2016 NBA campaign, the visitors are unlikely to spoil Toronto’s party at Air Canada Center. Bojan Bogdanovic failed to impress in the loss to Minnesota, but Raptors could find it hard to contain the Croatian player.

Coach Tony Brown has no fresh injury worries and he is likely to stick to his rotation policy. Brook Lopez should return to contention after being rested against Minnesota.

Toronto Raptors are eager to make amends for the defeat to Houston Rockets. As I have already mentioned, Raptors are a real force to be reckoned with at home and they are widely expected to record their 24th win at their Air Canada Centre of the season. DeMar DeRozan is undisputedly the team’s key player and he has been impressive this term when playing in front of home fans. DeRozan scored 47 points in previous two games and taking into account that he netted 30 points in the 112-110 win over Nets earlier this season, I believe that he will lead his team to victory yet again.