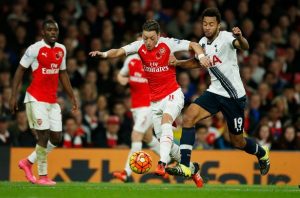 Tottenham and Arsenal, the two bitter local rivals, face each other at Wembley Stadium in what is expected to be one of the most entertaining games of Saturday’s program. Both teams are eyeing a place in the Champions League, thus a lively contest is on the cards.

Tottenham Hotspur will be looking to build on the FA Cup win over Newport County when they take on Arsenal in the North London derby. Spurs coach Mauricio Pochettino rested first-team regulars in the 2-0 win over the League Two side, but the Argentine tactician is likely to field the best possible side against Arsene Wenger’s troops. Tottenham have been impressive at home of late, with the team eyeing their fifth consecutive win at Wembley Stadium in all competitions. Harry Kane, who scored a late equalizer from the penalty spot in a 2-2 draw with Liverpool, is likely to pose a big threat for the opposition defenders. Spurs are only one point behind the Champions League berth in the Premier League standings and there is every chance they will go all guns blazing at Arsenal in Saturday’s derby. When the two teams met at White Hart Lane last term Tottenham defeated Arsenal 2-0 and that is certainly giving fans a reason for optimism ahead of the local derby.

January signing Lucas Moura has yet to recover from his injury, but coach Mauro Pochettino has no other selection worries ahead of the visit of Arsenal.

Arsenal chiefs were very active in the January transfer window. Alexis Sanchez is no longer part of the capital club, but two superstars Henrikh Mikhtaryan and Pierre-Emerick Aubameyang joined the Emirates Stadium outfit. The duo impressed in a 5-1 win over Everton and, no doubt, all eyes will be on them when Arsenal take on Tottenham at Wembley Stadium. The Gunners have slim chances of winning the Premier League title, but they are still in the race for a place in the Champions League. Arsene Wenger’s men are five points behind top four ahead of the North London derby, meaning that the visitors are likely to adopt an attack-minded approach in Saturday’s clash. However, seeing that Arsenal recorded only one win in last six away games in the national championship, I do not believe that there is a big value in betting on the visitors. You should bear in mind that the Gunners recorded their last win at Tottenham back in 2014.

Santi Cazorla and Danny Welbeck remain in the recovery room, whilst Petr Cech and Nacho Monreal should be fit to face Tottenham. Alexandre Lacazette is likely to start from the bench.

As previously mentioned, both Tottenham and Arsenal are eager to pick up all three points from Saturday’s local derby. Given the attacking potential of the two teams, a real football festival is on the horizon and there is every chance both teams will find the net in the North London derby.