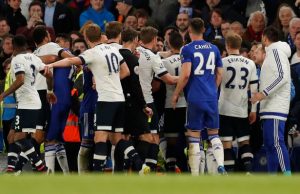 Tottenham Hotspur welcome Chelsea at Wembley Stadium in Sunday’s London derby. Spurs kicked off the new Premier League campaign with a 2-1 win over Newcastle United at St. James’ Park, but they will have a much bigger fish to fry in the local derby against Antonio Conte’s men.

Tottenham Hotspur defeated ten-man Newcastle United on the opening day of the season, with the likes of Dele Alli and Benjamin Davis scoring for Spurs in the St. James’ Park clash. Tottenham coach Mauro Pochettino and his men have big ambitions for the 2017/2018 Premier League season and that is the main reason why the club chiefs decided to keep hold of star players in the summer transfer window. Key attacker Harry Kane was more than unfortunate not to find the net against Newcastle, but, no doubt, the last season’s top scorer is going to pose a big threat for the opposition defenders in Sunday’s London derby. Spurs are a real force to be reckoned with at home, but you should bear in mind that Mauro Pochettino’s troops face having up to 20,000 empty seats in their first home game of the season due to security reasons.

The likes of Danny Rose, Kieran Trippier and Erik Lamela are all sidelined with injury, but coach Mauro Pochettino has no other fresh injury worries ahead of the London derby.

Chelsea are determined to defend their Premier League trophy, but the title holders failed to impress in the opening match of the season, with the team suffering a 3-2 loss to Burnley at their Stamford Bridge. It has to be noted, though, that the Blues finished the game with nine men on the field as both Gary Cahill and Cesc Fabregas were sent off on the opening day of the season. Coach Antonio Conte can’t count on the duo for the Tottenham Hotspur game and seeing that key player Eden Hazard is unlikely to recover in time to face Spurs at Wembley Stadium, away win should not be considered. Diego Costa is on the verge of leaving the club and there is every chance summer signing Alvaro Morata, who scored on his Premier League debut at the weekend, is going to lead the line for the visitors against Tottenham. Anyhow, the Blues face an uphill task in their first away game of the season.

Aforementioned duo Cahill – Fabregas is out of contention through suspension, whilst Eden Hazard is likely to miss the game with injury. The likes of Pedro and Bakayoko should recover in time to face Spurs.

As previously mentioned, Chelsea head into Sunday’s showdown with a severely-weakened squad and seeing that Tottenham boss Mauro Pochettino can count on his key players for the local derby, I believe that there is a big value in betting on the hosts, who are eager to win their first Premier League trophy since 1961.