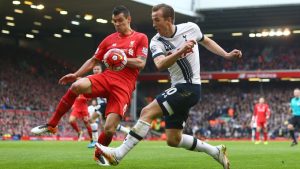 Arguably the biggest game of the Premier League week 3 will take place at White Hart Lane on Saturday with Mauricio Pochettino’s Tottenham welcoming Liverpool. Both teams will be looking to grab three points and a win that would be a great morale boost early on in the season.

Show me the money

Tottenham supporters are disappointed with the lack of transfer activity this summer and doubts have been spread over Tottenham’s chances of repeating the last season’s heroics. Spurs recorded their best ever Premier League finish last year and are heading into the Champions League season with pretty much the same squad list which many feel could be a problems during what is going to be a physically demanding season. Lack of transfer activity resulted in Tottenham head of recruitment Paul Mitchell resigning at the beginning of the season after Pochettino’s faithful assistant and friend used his resign to publicly demonstrate his disagreement with the club chairman’s policy. Victor Wanyama and Vincent Janssen are the only two summer signings so far, but Mauricio Pochettino believes his side will be competitive enough. Spurs opened their Premier League campaign with a disappointing 1-1 stalemate at Everton, while the 1-0 victory over Crystal Palace last week was less than convincing. The 2016-17 season will be a defining one for Tottenham and Pochettino’s young squad and Liverpool’s visit an early challenge that could have big impact on Spurs’ season.

First-choice goalkeeper Hugo Lloris is struggling with a muscle injury and will not be able to help his teammates against Liverpool. Mousa Dembele is suspended, while Chadli and Njie are both unavailable at the moment. On the good side, Son Heung-Min is at Pochettino’s disposal following his return from the Rio Olympics.

Winning mentality and squad quality aside, any team in the world aiming to win the title need to have consistency in their results in order to gain trophies. Liverpool however are the team that has been in serious shortage of consistency over the last couple of seasons and Jurgen Klopp’s main task this season will be to make Reds win in succession. Anfield side are arguable the only Premier League side able to beat the likes of Barcelona and Arsenal one day and then lose to Mainz or Burnley the very next. It is exactly that 2-0 defeat at Burnley that has been a wake-up call for the Reds, who went on to record a convincing 5-0 triumph in the League Cup over Burton away. Packed with good players and even better alternatives in all positions, Liverpool head into the Tottenham clash looking to record back-to-back wins and are eager to bounce back from the disappointing defeat at Burnley which came despite Reds’ overwhelming dominance. Bad news for Liverpool is that they will play their fourth competitive game in a row on the road, but Reds will be looking to repeat the heroics from 2014 when they grabbed a compelling 3-0 win at White Hart Lane.

Summer signing Loris Karius is still unavailable for selection as well as the likes of Lucas Leiva, Sheyi Ojo, Joe Gomez and Mamadou Sakho, who is also nearing an exit from the club. Germany midfielder and Euro 2016 semi-finalist Emre Can has picked up an injury against Burton, but his knock does not appear to be serious and Can could be involved.

Liverpool have apparently put a spell on Spurs who failed to beat Reds in their last seven encounters. Jurgen Klopp’s side always plays better against big teams who allow enough space for Liverpool to develop Klopp’s recognisable gegenpressing. We expect an openly contested game in London and will go for the visitors who have what it takes to emerge victorious.