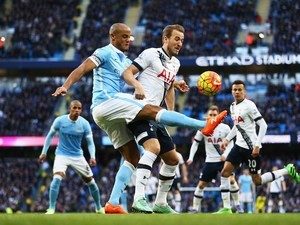 Tottenham Hotspur will be looking to melt Manchester City’s advantage in the Premier League standings to only one point when the two teams take on each other at White Hart Lane on Sunday afternoon. The Citizens aim to keep their 100% record intact, but they will have a big fish to fry this time out.

Tottenham Hotspur lost the title race with Leicester City last season, but the club owners managed to keep hold of key players in the summer transfer window. As a result, the Spurs are regarded as one of the main favourites to win the domestic trophy and they have been producing fine performances in the 2016/2017 Premier League campaign. Mauro Pochettino’s men are on a three-game winning run in the national championship and they did well to beat Middlesbrough at Riverside Stadium without key attacker Harry Kane in the starting line-up. In Kane’s absence summer signing Vincent Janssen will lead the line for the Spurs against Manchester City and he will certainly give 100% to open his goal-scoring account in the Premier League. Tottenham are eyeing their fifth consecutive win in all competitions.

Full-back Danny Rose should recover in time to face Manchester City. Eric Dier is doubtful and he will be assessed on the match day, while aforementioned attacker Harry Kane is definitely out of contention with injury.

Manchester City have been impressive under Pep Guardiola in the Premier League. The Citizens defeated Swansea City 3-1 at the weekend, with the team extending their winning run to six games in the national championship, but it has to be noted that the Etihad Stadium failed to impress against Swans. Kevin De Bruyne suffered an injury against Swansea City and, as a result, Man City failed to beat Celtic in Wednesday’s Champions League clash. Kun Aguero scored a brace against Swansea and all eyes will be on the Argentine attacker when the Citizens face Tottenham at White Hart Lane. Pep Guardiola’s troops scored 2+ goals in each of their last three away games in the Premier League, but Sunday’s game against the high-flying Spurs will be anything but a walk in the park for the visitors. In previous two meetings between the two teams Tottenham defeated Man City and I do not believe that the Citizens are capable of putting an end to the negative trend without Kevin De Bruyne in the starting XI.

Nolito misses the match through suspension, while Kevin De Bruyne is sidelined with a hamstring problem. Important defender Vincent Kompany remains in the recovery room as well.

Tottenham Hotspur have yet to suffer a loss in the Premier League this season and despite the fact that Harry Kane misses Sunday’s clash through injury, I believe that the in-form hosts are capable of grabbing something from the game. Man City will be without star players Kevin De Bruyne and Nolito this time out and, taking everything into account, under 2.5 goals bet appears on the cards.