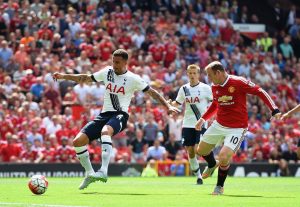 Manchester United will be looking to extend their winning run in all competitions to five games when they face Tottenham Hotspur at Wembley Stadium on Matchday 25. Both sides are eyeing a top-four finish and a lively contest is on the horizon.

Tottenham Hotspur did well to crush Everton (4-0) at Wembley Stadium in their last home game in the Premier League, but they dropped two points in a 1-1 draw with Southampton at St. Mary’s Stadium. Harry Kane helped Spurs grab something from the game, with the team’s top scorer extending his brilliant goal-scoring run in the national championship. Kane looks unstoppable at the moment and Manchester United defenders are likely to have their work cut out for them when facing the 24-year-old forward. Mauro Pochettino’s men were struggling at Wembley Stadium at the start of the season, but they scored 16 goals at home in previous five home games in the English top flight and that is certainly giving fans a reason for optimism ahead of the visit of Jose Mourinho’s troops.

The likes of Danny Rose and Harry Winks are both sidelined with injury, whilst Toby Alderweireld is unlikely to recover in time to face Manchester United. Christian Eriksen is likely to start despite suffering a minor injury.

Manchester United do not want to give up on their title dream. The Red Devils sit in second position in the Premier League standings ahead of the trip to London and they are 12 points behind their local rivals and league leaders Manchester City. Jose Mourinho’s men need to pick up all three points from Wednesday’s clash if they are to keep their hopes of winning the domestic trophy alive and they are likely to go all guns blazing at Spurs. Man Utd are on a five-game winning run in all competitions, but the game against Harry Kane and Co. will be anything but a walk in the park for the visitors. January signing Alexis Sanchez is likely to make his Premier League debut for the Red Devils against Tottenham and all eyes will be on the Chilean superstar when the two teams face each other at Wembley Stadium. Manchester United have been producing fine performances on the road of late and you should bear in mind that they recorded five wins in previous six away games in the English elite division.

Defenders Daley Blind and Eric Bailly remain in the recovery room, whilst Swedish attacker Zlatan Ibrahimovic has yet to recover from a knee injury.

Manchester United have been in a thrilling form of late and they are surely high on confidence ahead of Wednesday’s derby. However, seeing that Spurs are tough to beat at home, I believe that the two teams are going to share the spoils on Matchday 25.