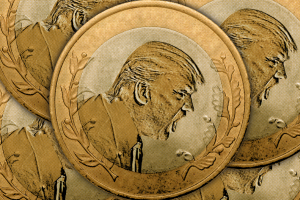 At first, this might sound completely insane, no matter how you look at it. A digital currency called TrumpCoin appears at first like a term coined by some popular political comedy show but the phenomenon is genuine. This cryptocurrency with a very distinctive name is actually a PAC (political action committee) that is trying to raise funds for the Republican nominee in the upcoming presidential elections in the US.

It is not taking the standard PAC routes of gathering traditional currencies in the form of funds for a candidate, this PAC wants to do things differently. Instead of using national currency, it plans to utilize the blockchain technology to build a cryptocurrency like BitCoin. However, in this case, the entire process would be put in place to supply Donald Trump with a new revenue stream.

The US elections have already got some established rules regulating the use of digital currency as a means of donation, but this is something completely new. Aside from sounding like a joke, the TrumpCoin story has several aspects to it, all of which tell a lot about the expansion of blockchain into the general public.

The new currency is calling itself the first CryptoPAC in the world, which currently even features a website that is being updated with the latest news and developments, along with a video presentation of the cryptocurrency. Its slogan utilizes the famous phrase of Donald Trump and calls for its users to make crypto great again. With it, at least in theory, users can support their nominee but not in a way that will completely drain their budget.

At the same time, TrumpCoin is not affiliated with the nominee’s official campaign or even anything related to the same process. Because of this, many are skeptical about the intentions of those who made it and also about their end goals.

Currently, the website states that 6 million of TrumpCoin are available on an open market, while 200,000 of these have been placed aside as a Trump Fund. They will be donated to the campaign once the cryptocurrency reaches a point of “substantial value”. The same value should begin to climb as the demand for them rises. This process, as their owners plan, will allow for the profits to be returned to investors and also forwarded to Trump’s campaign as donations.

Looking for All Investors

As many have pointed out, the language and the approach used by the TrumpCoin are very basic and its content seems determined to reach out to non-technical potential investors who might become interested once they get a chance to see this pitch. Here, one of the main hooks seems to be the concept that unlike regular donation where the money is given and forgotten, in the case of TrumpCoin, it acts as more of an investment. Once investors buy TrumpCoin they own them and these generate profit both for them and the candidate’s campaign.

This sound like a win-win setup, similar to using BitCoin to bet online: instead of only relying on the person’s desire to aid their candidate, the TrumpCoin system could also make the same process a wise financial decision. But, on the surface is scratched, there appears that some elements of TrumpCoin are in disarray.

The mentioned disarray is connected with the public arguments between developers who seem to be active in the TrumpCoin development. Here, accusations of lack of honesty motivations and personal financial gain started to surface, including the alleged desire of one of the developers to get rid of his coins from some other currency. This is by no means good news for the young altcoin.

Currently, on CoinMarketCap, the cryptocurrency stands at $0.04, which shows a fall in value from the initial $0.05. The same drop which took place over a past couple of days. As analysts point out that the structure of the cryptocurrency, along with an operation setup that is not that stellar all points to an unstable investment, the TrumpCoin did what every altcoin needs to do: get the attention of the public. The same factor will be the thing which makes it either sink or end up being a successful enterprise. The catch for this cryptocurrency is that either of these will take place in the next 4 months.

Being a PAC-based element means that its activity is focused on the presidential campaign. Of course, both PAC and Super PAC organizations can continue to raise money indefinitely, for example, if they explain this as preparation for the subsequent presidential elections. But, in the case of Donald Trump, this would be hard to pull off. With the actual elections being held in November 2016, the candidate can win or lose, but this makes no difference to the PAC – in both scenarios, it will stop having a purpose.

Because of this, the PAC and TrumpCoin have three more months that can allow them to take the project off the ground. During this period, the currency has to become very widespread to gain any traction that will take it out of the fraction of a dollar domain where a lot of altcoin currencies get stranded.

Clearly, the creators of this currency desire to do this through the masses of Trump supporters. With over 11 million direct votes in the primaries, Trump is definitely a force to be reckoned with. Even as his campaign is in dire straits because of his statements and personality, there is no doubt that over a dozen millions of Americans will vote for no one else except him.

If TrumpCoin can somehow get to these people and convince them that their product is worth their money, they could get that essential user base quickly enough. Here, the technology divide might be an issue, but other digital undertakings have managed to take this on successful, especially things like social networks, eSports, and other fields. It appears that their approach is designed to enforce this notion by making the system of a blockchain digital currency as simple as possible.

If they manage to use this hook on those determined Trump voters who would do anything to help him get elected, they stand a chance of making TrumpCoin more than a simple gimmick. It is doubtful that this altcoin could have any impact on the actual Trump’s fundraising, but if the rest works out, it could have the potential to make money to its investors nonetheless.