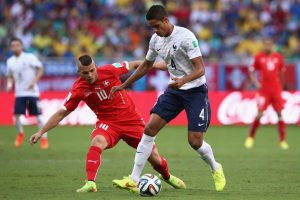 Uruguay have won four games in a row to get to the quarter-finals, beating Egypt, Saudi Arabia, Russia and Portugal to get there and conceding just the one goal along the way.

France needed an own goal to beat Australia, had a tough game against Peru and played an underwhelming draw with Denmark to end the group stage, but came through in the 1/8 finals.

Both teams will be confident. France will be glad Pogba and Kante had a great game and together with Griezmann and the on-fire Mbappe, they will be a threat. Still, Uruguay’s defense had been a fortress, especially the experienced Godin. Up front, there are concerns as they will have to wait to see whether Cavani will be fit to play on Friday afternoon.

After scoring only three goals in the group stage and only one of those from open play, France went on a rampage and scored four against Argentina to show us they are alive and kicking.

The French will be happy with four goals and will look to continue the run against Uruguay. This could prove a tough task as they’ve only managed to score against them in two games out of seven previously played. Four of those games were goalless draws. However, they won’t be looking to the past on Friday, but only at the target in front of them which is to reach the semi-finals.

Making it five in a row

Uruguay will be happy with the way their World Cup is going. They will want to make it five wins in a row against the French. But it won’t be easy. Cavani is a doubt and will probably not start even if he is fit. Suarez picked up a nagging injury in training which he will probably shake off before the match.

The defense will have a hard task ahead to contain Griezmann and Mbappe. Godin and Gimenez will be wary of the four goals against Argentina but will also know that Argentina’s defense was struggling throughout this tournament.
A change in tactics is probably in the offering if Cavani doesn’t start, with Suarez to be the lone striker up front. With some luck, Uruguay will also be at full strength and give France a fair game.

The fact that two teams play different styles of football can be a factor here. Also, with just Matuidi out through suspension, France will be near to full-strength, while Uruguay might have to play without a three-time goal scorer Edison Cavani.

France go into the game as a favorite. Still, Uruguay will defend with all they can, and history tells us they will be hard to break down. In the end, it might come down to attrition and who’s got the strength and skill in extra time.

The penalties are also a real possibility.