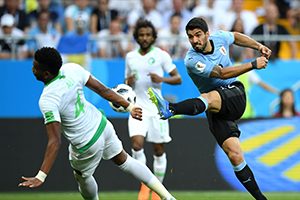 Since the fall of the Soviet Union, Russia has played only one game against Uruguay. In 2012 they played in a friendly which finished with a 1:1 draw. If you count the games the Soviet Union played against Uruguay, they’ve played a total of eight matches where Uruguay won only once, back in the 1970 World Cup.

Both sides have won their first two games of the group stages and have six points each at the top of the table. On the face of it, there is nothing to play for in this match, especially since Russia has a much better goal difference.

Still, Uruguay haven’t been as convincing in their wins as the Russians have been. Russia has scored 8 goals while Uruguay barely managed two. On the other hand, Uruguay hasn’t conceded any goals while Russia conceded the one against Egypt.

Uruguay will look to have a good game in order to prepare for the 1/8 finals where they would face either Spain or Portugal as things stand. In that aspect, it doesn’t make much difference who finishes first in Group A, as Spain and Portugal have been evenly matched so far.

Luis Suarez has scored once so far and he would want to add to that. However, Uruguay are sure to go to the knockout stage and it might be a good move to rest him.

Most betting sites predict that Cavani will play and there are good odds on him to score too. However, Suarez is also 4/1 to score the opening goal of the match.

Putting a stamp on it

Russia has definitely been a surprise of the World Cup. They have scored more goals in the two games than the total in the two previous World cups. Certain players, like Ignasevich have managed to keep the defense strong which than impacts the whole team.

Dzyuba has also been a revelation up front. And Cheryshev has already netted four goals. Still, with such a big goal difference, Russians will be top of the group even with a draw. They might be content to control the match from the back.

Russia has made good in the first two games, and finally look like they might have a chance to go to the later stages of the World Cup, especially since they will be playing in front of a home crowd. However, a smart play would be to rest key players before the 1/8 finals.

Uruguay will want to prove how good a side they are and give themselves a confidence boost. Coach Tabarez will probably try something else to see if he can have a more efficient team in the knockout stage.

Spain and Portugal play their respective games after this match, so the 1/8 pairs won’t be known during till after. There shouldn’t be any room for calculating by either team here. Uruguay needs this win more than Russia so they will probably try harder. While a draw is possible, Uruguay will probably edge it.