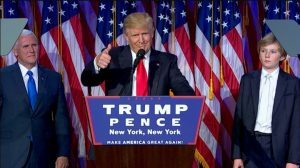 The US is once more defining itself as the hotspot of the new and emerging financial crisis that is slowly enveloping the world. Unlike the initial housing market burst of 2008, now the focus is the rapidly shrinking economy that is under the onslaught of the coronavirus pandemic. However, while most of the world is under some kind of financial and economic stress because of it, the US is presently riding the worst pandemic wave, not just in a medical sense but also because of its leading role in the global financial ecosystem.

This plays an important but hard to understand part in the crypto domain as well, including things like boosting adoption thanks to the recent US fiscal stimulus the country sent out to its citizens. But, beyond that, there are the macroeconomic moves that the US government is making, including its head, President Donald Trump. Recently, Trump touched upon an interesting factor – negative interest rates – and this reverberated through the entire world-wide news media, but also the finance community. What do negative interest rates actually represent and what is their connection with bitcoin and the rest of the cryptocurrency field?

The biggest cryptocurrency by market cap rose several percent on last Tuesday alone, despite having constant losses in the previous four days. This was the longest losing streak for nearly two months that have been otherwise very turbulent in itself. That time period covered the spectacular fall of the BTC price at the start of March when the crypto markets aligned themselves perfectly to the plummeting economy in the EU and US, but also across the world. However, now bitcoin had a small rally and it is related according to many analysts, to the information that the US President Donald Trump disseminated in public in roughly the same moment.

He said that as long as other nations are taking the numerous benefits from the negative rates, the US should do the same, calling the occurrence a gift. The term represents the negative interest rate policy or NIRP. This is an occurrence where banks are required to cash out an interest rate for any parking of spare funds, which includes a surplus above the norm, with their central national banks. This means that in essence, the banking system sees commercial institutions like individual private banks get penalized for keeping onto any excess funds. This is done so that there’s a strong incentive for banks to increase lending to consumers and businesses.

The main issue with the narrative that the US President is pushing comes from the long-term sustainability of the economic growth rate. This is especially related to the countries that saw years of negative interest rates. Japan is one of them and this nation has had a negative interest rate policy since 2016. In the four years since then, it has not seen any sustainable economic growth rate that would keep it also keep the yen gaining in value. Instead, the level of domestic inflation kept on rising.

The same goes for the EU which also tried to introduce a negative interest rate as a means of keeping the economy supplied with sufficient funds. In both cases, the money that the banks pushed towards businesses did not help dramatically in the economic development of these regions. Unsurprisingly, this is by no means deterring Donald Trump from his continuing push for the same negative interests.

Even though the entire issue is taking place in the traditional financial space, there are many crypto analysts who are certain that it will quickly reflect on the cryptocurrencies. Like esports, digital mass media, and other online-only ventures, cryptocurrencies, especially bitcoin, tend to react quickly to any even slightly related news, even though the reactions often bleed into one another. In this case, everyone is certain that any development regarding negative interest rates will be felt in the crypto landscape.

Here, unconventional monetary policies in the traditional market, as well as purchases of assets on a large scale, usually trigger inflation. This, in theory, offers a big boon for the bitcoin price because BTC tokens are both lowering their production over time and come with a limited supply. Out of all the problems that crypto markets have, susceptibility to infection is not one of them. The supply of BTC is hard-capped at 21 million and that will never change. The recent halving event just made the mining of bitcoin blocks less lucrative by 50 percent, which also adds to the scarcity.

While Donal Trump is focusing on the negative interest rates, experts see that bitcoin will also play a wait-and-see game. This will include an ongoing consolidation in the price range of 8000 USD and 9,500 USD in the short-term. Furthermore, there is a level of assuredness that the present slump in trading that started after the halving took place will continue much in the same manner. All of this is signaling an overall lack of direction for the bitcoin network’s value, which is not a negative thing for the present state of the world. Instead, the cryptocurrency domain as a whole is likely trying to gauge where the global economy will head next.

Presently it seems that the name of the game is an abundant fiscal stimulus to both the citizens and the businesses. This is all a frantic attempt to restart the industries and the national economies that have been devastated by the coronavirus pandemic lockdowns. Yet, experts are positive that this will end up being only a partial revival of the economy, with many industries like hospitality and travel being under long-term contraction.

From there, any government has a range of possibilities at its disposal, but sadly, most of these lead to inflation. Negative interest rates seem to suggest a similar trajectory. If that process begins to unravel, likely near the fall of 2020, the impulse for a rise in bitcoin value, just like other cryptocurrencies, will be plain to see. Yet, a lack of excess capital, like an economic catch-22, might very well curb the same potential right from the start.