Opinion The Use of Blockchain in Stand-Up Comedy Industry 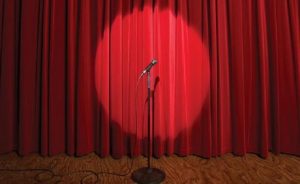 There are plenty of obvious domains where the blockchain tech could be applied with plenty of success. But, most of these related to enormous systems like that of banking or government services. Here, the blockchain custom setup would mostly help out with the maintenance and cost effectiveness of an already defined procedure. In other words, most of these blockchains would not offer anything new, simply allow the existing process to function with a less top-heavy infrastructure backing it up.

Because of this, the notion of using blockchain in show business in general seems legit, but employing it only in the narrow field of stand-up comedy seems, for most people, an odd choice. But, beneath the surface, there is a domain that is ripe for the development of custom blockchain solutions and with it, an entire field could both profit right now and grow exponentially in the years to come.

Here are the main points that would make the merger of blockchain and stand-up comedy industry a natural fit.

The Explosion in Popularity of Stand-Up Comedy

The live-performance comedy is nothing new. In fact, as a part of the theater experience, it is arguably as old as this art form, even though it was basically fused with the wider theatrical context. However, since the dawn of the Vaudeville variety show approach to performance, the single comic setup steadily began to grow and develop. The cradle of the art was established in the US and to a smaller extent, the UK.

Then, with the end of the WW1, the stage for the full stand-up comedy performance was set and it quickly developed in the coming decades. Since then, aside from the short slump during the post-Vietnam era in the US, it has steadily become more and more popular. However, the practice came into its own with the expansion of the internet when the first videos made for Comedy Central and some other specialized TV channels became global hits.

In a short few years, parts of the world that have never had a long history of stand-up comedy became engulfed with it and US comic became planetary superstars. Today, with the widespread access to the broadband internet and the video streaming sites, the stand-up comedy became a practice that millions of amateurs could enjoy and share with everyone else on the planet. The process is similar to that seen in things like eSports, movie streaming and many other digital-first industries.

Because of this, the industry started netting impressive revenue as a whole. Most popular stand-up comics are able to migrate to other domains quickly like acting or TV host gigs, but in spite of this, many chose to continue performing. Because this is a career choice, the professionals engaged in it created plenty of profit, but also experience problems with authorship. This is the first area where a dedicated blockchain network could be immensely helpful.

Copyright on the Fly

The issue of who created a particular stand-alone joke or a comical story performers use on their shows is always debatable. Most comic use each other materially and adapt it to fit their own style. However, at some point, the same borrowing and inspiration can turn into downright theft and there is little that the original inventor can do. While there are mechanisms for protecting the copyright value of many other forms of intellectual property, registering a single joke, some of which could be a single sentence, seems very complicated and excusing for the inventors.

But, a blockchain could be created to do just that. When a piece of digital data, in this case, a written joke is placed on the network by the author, it becomes marked and cataloged inside of the blockchain. When anyone else adds a joke, the same blockchain verifies it against the ledger of current jokes and looks for similar patterns.

If they do come up, a human verification takes place and determines if there is really any full overlapping or ever if the joke was accidentally plagiarized. Just like that, a comic could have the peace of mind that their original material is logged and ready for any potential issue that might come from plagiarism. This would be applicable even outside of the blockchain because it would timestamp the jokes.

This way, no one could argue that they had a joke earlier but did not show it to anyone. The blockchain would this way easily be a proof of a particular act of creation in a particular time. With this timestamp, the authors would have options at their disposal, including the ability to publicly shame the person who took their material.

Aside from the copyright protection that the blockchain tech could provide, there is another element that could be very appealing. As a part of the entertainment industry, comics often felt compromised by the outside elements like producers, club owners and many additional people who cut into their profits.

But, with the digital age, the link between the author and the consumers is a lot shorter and infinitely closer. With a popular YouTube video and the social media, a funny bit of a comic can end up going viral in a span of weeks. The same is true for any other material that the public recognizes as worthwhile.

Today, many comics sell directly to their audience, but this usually takes the form of entire comedy specials that go for a few US dollars. However, with the blockchain that is connected to the bitcoin, now widely used for things like online gambling and many other things, this process could enter a whole new level.

Here, using microtransaction a person could tip their favorite comic whenever they check out any of their material, circumventing any third-party service like AdSense ads or other current methods of monetization.

This way, the money would enter directly into the artists’ pocket, which is a dream many had since the first days of stand-up comedy. All of it could be provided by a custom blockchain that could be easily developed and provided to both the audience and the comics.