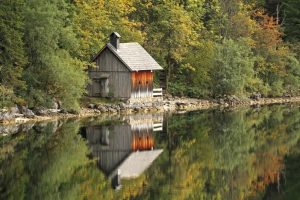 The 21st century signifies a time when globalization really took the world into the direction of a single (more or less) unified structure in terms of economy and culture. But, as this process continues on, there is an ever-larger part of the population, especially in the developed nations, who do not want to participate in this global society.

Some of them believe that this trajectory will potentially end up being very bad for humanity. Others simply do not want to take part in some elements of the modern society they do not agree with. But, no matter what their end motivation might be, all of these groups desire to create a lifestyle that will dislocate them from the society they do not support (partially or fully).

When they desire to act upon those sentiments, they decide to go off-grid and begin a life in a self-sustained manner. The same can physically be more or less isolated from the rest of the society, but in any case, it includes a clear pull-out from the processes that take place for the rest of the country’s citizens.

As a number of off-gridders swells, the issue of bitcoin use comes about naturally. Here are the basic facts about how could those who live in this particular lifestyles utilize the bitcoin digital currency.

For all off-gridders, the modern system in its entirety is broken. The exact nature of the fault could differ from one group to the next. For example, preppers (people focused on survival prepping procedures and process) might believe that a catastrophic event will change the entire society for the worse, if not guide it into an apocalyptic setting. Other off-gridders might not share this opinion, but the fact is that all of them end up resenting the current system and simply leaving it as active participants.

This provides the off-gridders with the setup they are looking for, which is to live off the grid in any sense they deem relevant. But, it also ends up providing them with a myriad of other problems. Firstly, this takes shape in the form of access to services. While the basic monetary economy is still valid for off-gridders, they choose not to get access to utilities like power, water or heating.

Instead, they desire to make their living self-sustainable and produce their own needs independently. That is why many people living this lifestyle chose to attain things like solar panels, wind turbines, fuel generator and miniature water treatment equipment. But, the modern world also entails many other services that cannot be easily replicated from scratch. Finances are one of them.

Banking without a Bank

As it was earlier stated, off-gridders rarely go for the total abandonment of the systems of an organized society and money is one of the things they need to keep a hold of. Firstly, any off-grid living demands the ability to purchase a range of equipment, building material and property. With this, the same off-grid existence can commence.

Secondly, once the off-grid structures are built, they individual, couple or a family will need to buy necessities like food or medicine from time to time. Both factors demand money that is utilized on a regular basis. Now, while some off-gridders chose to remain in the workforce where they get a regular paycheck or have some other type of income stream, others do not. Instead, they step out and enter off-grid culture to get away from all of that.

Because of this, money is attained using things like barter and irregular jobs which are taken to support the lifestyle. But, even though there is an influx of potential revenue streams both standard and unusual, the ability to use that money becomes limited as most people living off-grid chose not to use traditional banking services. In this regard, as many groups of tech adopters, eSports players and other forward-minded people already know, bitcoin is a network that allows people access to banking services without being an actual bank.

Bitcoin is the perfect vehicle for anyone who is looking to do monetary transactions away from the traditional sources of these services. The ease with which a person nowadays can exchange any mainstream currency and transform it into BTC is staggering. Because of this, for a range of years now, people have utilized bitcoin to do things like purchase goods or service, bet online as do many more other things.

Additionally, the cryptocurrency possesses other advantages that the off-gridders would universally appreciate. It offers anonymity along with a completely secure method of making financial transactions. Being that most in this lifestyle strongly object to big business and big government oversight of their lives, the anonymity is more than welcomed.

Finally, bitcoin is a fully decentralized network without a single control segment. This not just the issue of whether the bitcoin network has some obscured or hidden mechanism of control. As an open source network, all of its elements are already well-known to the developers or business leaders operating in the same domain.

All of this makes bitcoin the ideal currency for the off-gridders community, regardless of what their individual reasons for existing modern society were. Any of them would be able to get bitcoin and utilize it however they like, while at the same time they remain outside of the other financial systems they despise.

Bitcoin is a fine fit for the off-grid lifestyle, but it comes with an important requirement – access to the internet. Without it, the network is useless for regular people who plan on utilizing bitcoin instead of simply purchasing it as an investment.

But, the internet is also a form of government-controlled utility, so it is understandable why the off-grid community would have an issue with it. Still, bitcoin has to have internet access to work for its wallet holder, so this is a compromise everyone in the same lifestyle has to make.

For those who do sway to the option of getting bitcoin, it is certain that they will find the ideal partner when it comes to digital currencies which can go head to head with any other traditional monetary means.