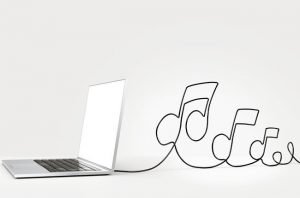 Music is the number one art form in the world and in this regard, there has not been any change quite possibly since the beginning of the human civilization many thousands of years ago. It appears that music is the ideal medium for humans because it allows them to enjoy it while they are able to stay occupied with something else. Additionally, music is able to emotionally enforce any feeling, because of which people can consume it when they feel happy, sad or anything in between.

Today, the power of music is unmistakable, which is especially evident when the development of technology in the last 40 years is examined. From Walkman to the iPod, it is clear that music mobile devices spearheaded the way how humanity consumes records and tunes.

Since the development of the broadband Internet, the focus has shifted to the streaming of music as the ideal medium for its enjoyment. In fact, in the last 5 years, the same method of attaining music surpassed digital downloads, who themselves stopped the widespread sales of music on physical mediums (CDs).

At the same time, music and business have always been tightly connected. In the digital age, the business end struggled to keep its previous monetization models in place, often being threatened from different angles. But now, thanks to BitCoin, the same industry and its most recent globally popular mechanism of delivery, the streaming services, could find a way how many of the issues could be overcome.

Initially, the global music industry, especially the heavy-hitters from the US, felt that the biggest adversary to their profit margins became the expanding pirate network that found its home on the internet. Here, the industry mobilized their legal divisions in an instinctive reaction of protecting the space that cannot be protected.

Many still remember the fate of Napster and other cases like it, which failed completely in their basic purpose of stopping piracy. Instead, the pirated content continued to develop and expand, seemingly untouched by legal action that differs wildly between different nations.

Accepting the hit, the music industry decided to soften its approach in the latter years of the 21st century and try to find some other way of earning money from music consumers. In this domain, the interesting fact was noticed on the biggest social network in the world at that time, YouTube. Here, marketing departments began to figure out that huge numbers of users simply enjoy their music on YouTube and gradually stop to download it on their devices, even the pirated versions.

At this point, the idea of paid streaming services was born and developed at a staggering pace. In rapid succession, several big streaming services were created and opened for business, ready to take the cut from the new market of people who want to enjoy and not necessary own their favorite music.

However, possibly because of their previous experiences in the digital domain, most of these services provided a revenue sharing process that is problematic for the artists themselves. Services like Spotify offered a huge reach for anyone who is willing to sign up for their artist catalog, but the revenue from each streaming was exceedingly small.

Some artists rebelled against this, others kept quiet because of the need to reach the audience, even if this provides them with a meager income. In the music business, like always, artist’s first need to become well-known and generate money from live shows, which is why many accept to be underhanded by the streaming services. But now, with BitCoin, the same relationship can be changed for the better in a way that would keep the service provides profitable and provide artists with a larger piece of the revenues.

Microtransactions as an Alternative

BitCoin and the music industry are not exactly strangers. For example, several globally famous hip hop artists like 50 Cent, who are already in the entrepreneurial domain, accept BTC payment for their music. At the same time, small independent artists like up-and-coming bands regularly try to gather funds for local or regional tours in different means, including BTC. So, it is clear that BitCoin has already established a presence in the music world.

But, none of these instances include really big corporations and businesses that offer a complex service like worldwide music streaming. The main reason for this is the idea that BitCoin was something of a passing trend or at best, a risky place to invest money.

However, many digital processes met the same skepticism at the beginning, including mobile devices, E-Sports and other things which became industries worth billions of dollars. Now, after its survival, BitCoin definitely proved that it is here to stay and the music industry should take notice.

Using microtransactions as a method of paying for streams, a service could be created that operates using a fair distribution of income. Instead of basing itself on a monthly subscription, a BTC music streaming service could bill each and every stream individual to the users.

By making prices small, which is completely possible using Satoshi as the method of payment, user monthly payments could end up exceedingly low, measuring in amounts that are less than a single US dollar. For each stream being played, the service takes a tiny amount while everything else goes directly to the artist.

Additionally, there would not be a need for making a complex system of revenue sharing that would produce endless calculation about who gets how much each month. This alone could make the services a lot leaner when it comes to their workforce and the needed infrastructure.

A Way Forward for Everyone

Judging from experience, music industry often reacted harshly and ultimately against its own benefit whenever it felt threatened by the advances in the digital domain. Here as well, the idea is not that the BitCoin streaming service should kill off the traditional models. Instead, it could be used to enhance it to a point of making everyone a lot happier with the deal that they are offered.

Today, BTC is used by many people to bet online but this is not designed as something that should compromise the online betting that employs traditional methods. It just enriches the existing ecosystem for the benefit of all participants.

Streaming services that are based on BitCoin could provide an interesting alternative for everyone in this domain without making them feel under attack. If successful, it would provide others as an additional means of charging their users. In that scenario, like with many other future BitCoin ventures, there would be only winners, regardless if they are music fans, service providers or artists.