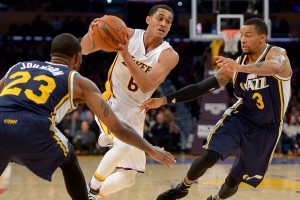 Vivint Smart Home Arena will host Friday’s clash between Utah Jazz and Los Angeles Clippers. Utah Jazz are with one foot in the next round, but Clippers should not be written off just yet.

Despite being regarded as underdogs in the tie against Los Angeles Clippers, Utah Jazz are on the right track to book their place in the Western Conference semi-finals. A win over Clippers on Friday evening would see Jazz made it to the next round, but, no doubt, the hosts are under big pressure ahead of the visit of Chris Paul and Co. Quin Snyder’s troops have been impressive at home this season and it has to be noted that they recorded ten wins in previous eleven home games in NBA. Utah Jazz took advantage of Blake Griffin’s injury in Game 5, with Gordon Hayward leading the team to the 96-92 win with 27 points. Quin Snyder’s charges need to be at their sharpest in Friday’s clash if they are to advance to the NBA play-offs quarter-finals.

Alec Burks misses the match with a knee injury, while Raul Neto has overcome his injury. Coach Quin Snyder has no other selection worries ahead of Friday’s game.

No Griffin, no party

Los Angeles Clippers face an uphill task in Friday’s game at Vivint Smart Home Arena. Doc Rivers’ team need to beat Utah Jazz on the road if they are to keep their hopes of making it to the next round alive, but that is easier said than done. Star player Blake Griffin in previous two games and in his absence, all eyes will be on Chris Paul. CP3, though, is not capable of defeating Utah Jazz by himself and it is no surprise Clippers are regarded as underdogs in Friday’s clash. Doc Rivers’ team suffered 19 defeats away from home in the regular season and, taking everything into account, away win should not be considered. J.J. Redick scored 26 points in the 96-92 loss to Utah Jazz and the former Orlando Magic shooting guard will be yet another man to watch in the away team. It has to be noted that Redick has been averaging 15 points this term.

Blake Griffin is out for the season with a toe problem, while Diamond Stone should recover in time to face Utah Jazz. Doc Rivers has no other injury worries ahead of the trip to Salt Lake City.

Utah Jazz proved their worth in Game 5 and they are now on a quest to get their job done in the tie against Los Angeles Clippers. Utah are a real force to be reckoned with at home and they are likely to roll over Griffin-less Clippers at their Vivint Smart Home Arena. Anyhow, fans should see a real basketball festival in Salt Lake City.