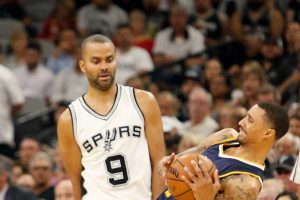 San Antonio Spurs will be looking to get their revenge on Utah Jazz for a shocking 106-91 loss at AT&T Center when the two teams face each other at Vivint Smart Home Arena on Friday evening. Jazz outplayed Dallas Mavericks in their last home game and that is giving fans a reason for optimism ahead of the visit of Gregg Popovich’s team.

Utah Jazz have been having their ups and downs this season. Quin Snyder’s men have been impressive at home ground in the new NBA campaign and they did well to beat their next rivals San Antonio Spurs on the road. Jazz head into Friday’s game against Kawhi Leonard and Co. following a 97-81 win over Dallas Mavericks and it has to be noted that George Hill impressed in the victory over Spurs, adding 25 points, four assists and six rebounds. Rodney Hood has been in a fine form of late as well and he has been averaging 17.4 points this term. Utah Jazz are tough to beat at home, but recording yet another win over the star-studded Spurs is easier said than done. In their first home game of the season Quin Snyder’s team recorded a 96-89 win over Los Angeles Lakers.

Boris Diaw has joined the likes of Gordon Hayward and Alec Burks in the recovery room, but coach Quin Snyder has no other selection worried ahead of the San Antonio game.

Life without Tim Duncan continues. San Antonio Spurs have been producing fine performances this season and Kawhi Leonard has been the team’s key player so far. Leonard scored 30 points against Utah Jazz, but that did not help Spurs avoid defeat to Quin Snyder’s team. LaMarcus Aldridge, on the other hand, has been playing below expectations this season and Friday’s clash against Jazz could be the turning point for the former Portland Trail Blazers man. Gregg Popovich’s troops aim to keep their 100% record on the road intact and it has to be noted that they defeated the likes of Golden State Warriors, Sacramento Kings and Miami Heat away from home earlier this season. When the two teams met at Vivint Smart Home Arena on Tuesday Pau Gasol scored no more than 8 points for Spurs, but he did well to prevent Rudy Gobert from scoring more than six points.

Davis Bertans and Danny Green are both sidelined with injury. The likes of Murray, Forbes and Laprovittola played less than one minute in the 106-91 loss to Utah and the trio is unlikely to play some part in Friday’s game.

Utah Jazz proved their worth in the 106-91 victory over San Antonio in Texas, but I am not tempted to put money on the hosts this time out. Gregg Popovich’s men have been producing outstanding displays on the road this season and seeing that Kawhi Leonard looks unstoppable at the moment, away win appears on the cards.