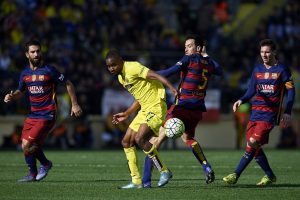 Barcelona will be looking to bounce back from a Copa del Rey loss to Athletic Bilbao when they square off against Villarreal in their first league game of the new year. Luis Enrique’s troops aim to retain top position in the La Liga standings, but Sunday’s clash against the Yellow Submarine will be anything but a walk in the park for the Catalan giants.

Villarreal finished last season in fourth place in the standings and, as a result, the team booked their place in the Champions League qualifiers. The Yellow Submarine failed to eliminate Monaco in the two-legged tie, but they did well to make it to the Europa League last 32. Fran Escriba’s men have been producing fine performances in the national championship as well and they sit in the Champions League berth ahead of Matchday 17. Villarreal suffered a 3-1 loss to Real Sociedad at “Anoeta” in Wednesday’s Copa del Rey game, but it is well known that the Yellows often struggle on the travels. Villarreal defeated the likes of Atletico Madrid and Sporting Gijon in previous two league fixtures, but given that coach Fran Escritba can’t count on several first-team regulars for the Barca game, the hosts would be happy with one point from Sunday’s derby against Leo Messi and Co.

Cedric Bakambu is on international duty with Congo DR, whilst midfielder Bruno and defender Victor Ruiz are both rated doubtful for the Barcelona game. Samu Castillejo has overcome his injury, but the likes of Roberto Soldado and Denis Cheryshev remain in the recovery room.

Yet another must-win game

Barcelona are determined to defend their La Liga title, but the reigning champions have already dropped 14 points in the Spanish top flight this season. The Catalan outfit sit in second position in the standings ahead of the trip to Villarreal; they are three points behind league leaders Real Madrid, but los Blancos have one game in hand. This has to go down as a must-win game for the title holders and I am positive that coach Luis Enrique is going to field the best possible side against Villarreal. Barca failed to impress in a Copa del Rey loss (1-2) to Athletic Bilbao, but Leo Messi extended his goal-scoring run. The Argentine ace has found his best form and he is likely to prove a handful for the opposition defenders. Luis Enrique’s charges are eyeing their seventh away win of the season, speaking of national championship.

Jeremy Mathieu and Aleix Vidal both missed the Copa del Rey game with injury and the duo is unlikely to recover in time to face Villarreal. Luis Enrique has no fresh injury worries ahead of the match.

Barcelona need to keep on improving their game if they are to defend their La Liga title. Luis Enrique can count on all of his key players for the Villarreal game and considering that the hosts head into the match with a severely-weakened squad, I believe that the visitors will pick up all three points from the Camp El Madrigal showdown.