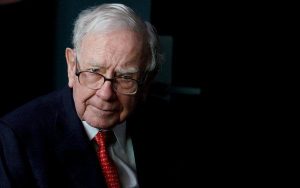 The billionaire and investor Warren Buffett repeated his stance that bitcoin – and presumably, all other decentralized cryptocurrencies – are not a good investment idea. At the same time, he did say that he is both fascinated and impressed by blockchain tech.

The statement came on the CNBC when the CEO and chairman of Berkshire Hathaway, a multinational conglomerate in the financial industry, said that people are delusional about bitcoin. This is in many ways a reiteration of his views on cryptocurrency and for those who follow the relationship between the traditional financial sector and the crypto domain. However, once again, no matter how the topic might seem outdated and whitewashed by the media coverage, it offers a fascinating insight into the approach of the old-school financial circles.

During the interview, Buffett did not hold back on the praise of blockchain. He labeled the technology as ingenious, but nothing of the sort was said for its biggest current application, the blockchain network. Instead, Buffett said that bitcoin, presumably meaning primarily the BTC token but the entire network as well, has no value at all. The reason why he thinks this way is the fact that bitcoins do not produce anything, in his own words.

Instead, he believes that their owners – and anyone else for that matter, could stare at a bitcoin for the whole day and see no, as he states, little bitcoins emerge from their holdings. This might sound really bizarre for anyone who is somewhat knowledgeable of the cryptocurrencies, or social media, programming, esports or anyone other IT branch, but it shows how Buffett and others like him perceive digital currencies that are based on the blockchain.

Buffett accepts that his knowledge of the whole domain is limited. He said that others took the effort to explain to him how cryptocurrencies, mainly bitcoin and blockchain work. By this, he probably means that he had little or almost no other information about it previously. However, he maintains that the partial and recent knowledge does not make the setup any different.

Here, he considered that he understands that people do get their hopes up about a thing like bitcoin and the way it can change lives. This is fueled by an ingenious setup that allows for a limited supply and growing difficulty in creating tokens as time goes by.

Yet, he underlined that bitcoin is just one product of blockchain and noted that it does not take anything back on the original technology. Still, Buffett did not explain why did he believe that blockchain is so important and in what way can it impact the financial sector – or any other for that matter.

While Buffett did not talk about the general application of blockchain tech, he did talk about the fact that JPMorgan Chase is starting its own cryptocurrency that is pegged to the USD. The digital currency will be called JPM Coin. But, while he did mention JPM Coin, he did not present what in practical he thought about it.

Ironically, Jamie Dimon, the CEO of JPMorgan is one of the most famous detractors of bitcoin, which he labeled as a fraud back in 2017. Later, when the fact that bitcoin is not a fraud – whatever that was supposed to mean or symbolize – Dimon said that he regretted the comment that showed him as someone who is wildly uninformed.

Still, he never really went back on the basic idea that bitcoin is both dangerous and problematic as a piece of fintech. In spite of this, Dimon is still a junior bitcoin critic of bitcoin being that Buffett started his reservation on the digital current time and time again. The same goes for his company, where Buffett categorically denied that Berkshire would hold any position when it comes to bitcoin futures.

Once more, Buffett statements come as something that is first and foremost uninformed about bitcoin. In spite of the fact that he underlines others explained bitcoin to him, it seems like they themselves did not really understand the underlying basis of the network. This is especially seen in the idea that Buffett does not actually understand the energy value that goes into the network.

The principle of blockchain production of new BTC blocks is one thing, but the idea that huge energy expenditure is needed to allow for any of this to occur is completely gone in his reasoning. Instead, it is likely that he perceives the process of bitcoin creation as many of those who learn that BTC tokens are digital – they are made in the same way files are copied. However, the only difference is the fact that here these files are unique.

In other words, many who hold a similar position like Buffett simply believe that at one point, someone will appear on the market with a million brand new BTC and drop the price to its knees. This is simply not possible apart from the off-chance that the wildest conspiracy theories about bitcoin are completely true. At the same time, Buffett is more than old enough to know that catastrophic bubbles occurred in very traditional markets where the same setup had not saved countless individuals and companies from losing fortunes time and time over.

Lastly, there is once again that idea that bitcoin is actually useful for many millions of individuals around the world. Unlike Warren Buffett, these are not billionaire investors who perceive bitcoin as a potential to earn another one or two millions. Instead, BTC is the only actual financial service they have access to. Because of political or financial reasons, unlike Buffett, they have no means of walking into a bank and opening an account.

Instead, they do their business and attain (or protect) their livelihood using this digital currency. For them, bitcoin is not some theoretical concept to be (badly) comprehended, but a means to an end that was denied to them because of geopolitics or poverty. In that, the true value of bitcoin lies, but how could a person like Buffet or Dimon see this dimension above the trading and market aspect of it all?