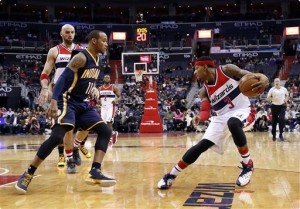 Washington Wizards will be looking to extend their winning run in the league to six games when they take on Los Angeles Lakers at their Verizon Center. Lakers outplayed Denver Nuggets on Tuesday, but beating Wizards on the road is easier said than done.

Washington Wizards are on the right track to book their place in the Eastern Conference play-offs, but the season is quite long. The capital club have been in a splendid form of late and they are on a five-game winning run in NBA ahead of Thursday’s game against Los Angeles Lakers. It is well known that Wizards are tough to beat at home, but it remains to be seen if they are capable of recording their 16th consecutive win at their Verizon Center. Bradley Beal scored 28 points against New York Knicks, whilst key player John Wall had 13 assists in the 117-101 triumph over Jeff Hornacek’s troops. Washington occupy 5th position in the Eastern Conference and the team’s goal is to finish the regular season in top 4. Wizards are regarded as hot favourites to win Thursday’s game against Lakers, but they will have to prove their worth on the court.

Ian Mahinmi has yet to recover from a knee injury, whilst Danuel House is out for rest of the season (wrist). Coach Scott Brooks has no fresh injury worries ahead of the Los Angeles Lakers game.

Los Angeles Lakers gave fans some cheer on Tuesday, with the team beating Denver Nuggets at home, but it has to be noted the visitors were without in-form center Nikola Jokic. Luke Watson’s team managed to put an end to their three-game losing run in the league, but they failed to move away from the rock bottom. Lakers sit in the last position in the Western Conference and, taking everything into account, they are having yet another season to forget. The team have been struggling on the travels this season and you should know that they suffered a loss in each of their last ten away games in NBA. Los Angeles Lakers face an uphill task in Thursday’s clash against Washington Wizards, but the fact that they defeated John Wall and Co. in their last meeting in the USA capital is giving Lakers fans a reason for optimism.

The likes of Huertas, Calderon and Robinson did not play against Denver Nuggets (coach decision), but the trio could play some part in Thursday’s game against Wizards. Julius Randle is a major doubt and he will be assessed on the match day (illness).

Washington Wizards are a team with two faces. The capital club have been having their ups and downs on the road, but they have been producing terrific displays at home this season and seeing that Lakers are on a ten-match losing run on the travels, home win should be considered.