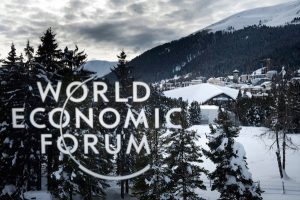 Cryptocurrencies appeared as a topic on one of the stages at World Economic Forum or WEF that is traditionally taking place in Davos, Switzerland. There, a number of representatives from elite global circles of economy and politics took part in this discussion, which had an aim of assessing whether or not bitcoin is actually a currency.

The talk was interesting because it provided an insight into the way people and organization at the very top of the global power circles see this phenomenon. At the same time, it also showcased some stereotypes and revealed more about the participants of the discussion than its topic.

One thing is certain – it showed that the cryptocurrency is a growing global force that will not be easily ignored or sidelined – millions who use it for trading, online betting, investing and so much more show this to be true. Here is an overview of the discussion and what did it show when it comes to the WEF perceptions of the cryptocurrency in general.

The panel was named the Crypto-Asset Bubble. On it, deputy governor of Swedish central Bank Cecilia Skingsley was present, along with Radian Partners principal Jennifer Zhu Scott, Index Ventures general partner and co-founder Neil Rimer and a winner of the Nobel Prize in Economics, Robert Shiller. During the talk, Shiller said that cryptocurrency was a clever idea that would be better applied in some other domain.

He also stated that he was impressed with the tech and the fact it was spreading in some areas, but that it has “gone viral” as a currency. In his view, blockchain is important, but it is not stable as a currency. Jennifer Zhu Scott chose to take a more critical tone and she called bitcoin a very lacking currency. The same was underlined by Skingsley, who pointed widespread acceptance and stability as a requirement for a currency to be efficient.

According to her, bitcoin, just like other cryptocurrencies, does not meet the necessary criteria for being called money. They are assets but they are not a stable storage means for holding onto any kind of value. The same assets fluctuate a lot and cannot be used in a meaningful manner as a medium of exchange.

Rimer, on the other hand, stated that bitcoin is one of the most generous, audacious and relevant inventions he has ever seen. At the same time, it is only nine years old. The period up ahead will be dynamic and bitcoin could eventually fail. In fact, there is the possibility of BTC value going down to zero, as no mechanisms were established to prevent this. Even if the same does occur, for him the results of this experiment have been remarkable.

Yet, he also underlined the need of the cryptocurrency to fit into the existing framework of different regulatory mechanisms. Without this, any digital currency will continue to be perceived as something unregulated and potentially dangerous for anyone leaning towards the more conservative investment strategy.

At the same time, Scott stated that a stable cryptocurrency might have a completely different setup than that of current bitcoin. He said that in a decade, it could appear as much different as social media or eSports of today when compared to those products that began the same trends.

There is a strong sense that many entities on the WEF events have a huge issue with digital currencies that is something rarely mentioned publicly – they are completely decentralized. In fact, there is not even a singular element behind most digital currencies. Instead, they are a plug and play networks but which continue to do a solid job of transferring value between users.

On the other hand, most, if not all entities in WEF include systems that are centralized. These are central banks, global brands, and practically any other organization. It is natural to expect that centralized and decentralized systems coexist in a problematic relationship. This could be one of the reasons why cryptocurrency domain is seen with a level of contempt and even hostility in places like the WEF.

Yet, as reality clearly shows, both can function completely normally with one another. Digital currencies lean on the traditional banking and financial systems for getting the fiat funds into cryptomarket. Traditional systems, like the recent start of bitcoin futures, also use some of the characteristics of the digital currencies for their direct financial benefits.

Not only that, but many traditional financial firms, especially those in the US have shown interest in expanding into digital currencies. A lot of this comes because of the demand of the public, which is becoming more and more fascinated by digital currencies. As this takes place, hedge fund managers are getting a request to start investing in cryptomarket, regardless of the high level of volatility.

Through this interconnected ecosystem, the outlook of the WEF participants seems outdated. Instead of moving towards a more integrated space, their rhetoric seems to be mainly negative about digital currencies. However, at the same time, the business keeps on going on both sides of the fence that divides the cryptomarket and traditional ones.

The Fear of the New

Unlike the Fear of the Missing Out which was gripping much of the digital currency investment community, especially the newcomers, the FOTN is the dominant emotion of the event in Davos. The fear of the new is something which is completely understandable for the wider community.

Both politics and financial bodies have more to lose in the short term than win with any digital currency. The same balance will naturally shift as time goes by and most of these bodies realize the same, but the fear is stronger than hope. This is why so many of them desperately focus on guarding against the change, instead of embracing it.

Yet, the dynamic of the real world shows that adoption and development of the digital currencies and blockchain is only advancing faster and faster. Davos 2018, on the other hand, might show that this domain is not ready to accept that fact, but in the end, this does not have the means of slowing down or stopping the journey of the cryptocurrency ecosystem.