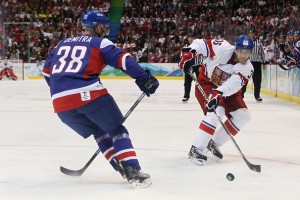 Ice hockey is the number one sport played on ice, if you look at the global audience and viewing figures. Ice hockey is a rapid moving game and was first played in Canada in the 1800s. It is thought to stem from the United Kingdom’s field hockey game, and as a result, it can go by a few different names.

Most northern hemisphere countries (the main players of ice hockey), such as the USA, Canada, the USA and Scandinavian countries will refer to ice hockey as simply hockey, whilst other countries (ones which also play field hockey), will refer to the game as ice hockey. Ice hockey is a major sport to bet on with Bitcoins, and several competitions tend to be more exciting to bet on than others.

Bet On Ice Hockey at CloudBet

Bitcoin bets can be placed on a host of ice hockey competitions, although the two biggest seem to be the NHL and the IIHF World Championships. These two major sporting events alone generate millions of dollars’ worth of sporting bets each year. Ice hockey is also played at the Olympic Games, which offers yet another opportunity to bet your Bitcoins on this sport.

The National Hockey League (NHL) is the number one hockey league in the world, depending on who you ask. It consists of 23 teams from the United States of America, and 7 teams from Canada. The winner of the NHL claims the Stanley Cup, which is the oldest professional sporting trophy in North America.

After starting out in Canada, the NHL rapidly expanded into the United States, and today most of the teams come from the US. The league is organised into two conferences of two divisions each. Each division has either 7 or 8 teams in it, and after a regular season of 82 matches per team, a playoffs tournament is used to determine the winner of the Stanley Cup. The winning team is declared the NHL champion for that season.

The IIHF World Championships are an annual competition, held by the International Ice Hockey Federation. This competition is for international hockey teams, and not domestic sides. The competition was first founded in 1920 during the Olympic Games, although it later hosted its own event in 1930. This World Championship is actually divided up into groups (divisions). Currently, Austria, Belarus, Canada, Czech Republic, Denmark, Finland, France, Germany, Latvia, Norway, Russia, Slovakia, Slovenia, Sweden, Switzerland and the USA compete in the Championship division.

After a group stage, a quarter-final, semi-final and final are used to determine which international side is the World Champion that year. The way that the IIHF World Championship is played (in relation to its divisions) is one of the most unique tournament structures for any international sporting event.

There are many domestic ice hockey competitions that you bet Bitcoins on, too. One of the most prominent of these other ice hockey leagues is the Kontinental Hockey League (KHL). It began in 2008, and features 28 clubs from Belarus, Croatia, Finland, Kazakhstan, Latvia, Russia and Slovakia. It used to be known as the Russian Superleague, but has since expanded. It plans to expand into Europe and Asia over the coming years, too.

Where can I bet on ice hockey with Bitcoins?

They have a delightful welcome bonus for first time players to claim, when they make their maiden deposit at the Bitcoin sports betting site as a new player.