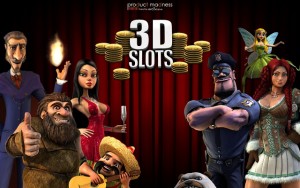 Like all forms of gambling games, online slots are ever evolving. The recent advances in digital graphics have made it possible for some slots to look out of this world. We call these games 3D slots, due to their superior graphics.

Factor into that equation the fact that Bitcoin is also rapidly becoming a much used deposit method, and you’ll find that you can play many Bitcoin 3D slots.

But is there a difference between regular online slots and 3D slots? Not really. If you’ve played online slots before, you should have no problems playing 3D slots. If you haven’t, this quick guide should help sort you out.

Play 3D Slots With BitCoin At These Casinos:

Setting up your bet

As with any gambling game, the first thing you need to do to play 3D slots is place you wager. 3D slots are more difficult to bet on that simple card games. Your bet is constituted of several things. Firstly, your bet is based on the amount of paylines you are playing with. It is also made up of the amount of coins you are playing per payline, and finally, the value of the coins you are betting with.

Paylines runs across a 3D slot’s reels. They are lines upon which you must match symbols. Some run all over the place, and others are straight across the reels. To bet, you’ll first need to decide how many paylines you wish to bet on – the standard option is to play with them all. Then you must choose the value of your coins and how many coins you’ll play per line.

Winning on a payline

In order to pick up a win on a slot, you’ll need to match symbols on a payline, as we’ve said. These symbols must be identical. You find out which symbols offer the best pay-outs by viewing the slots’ pay-table. It is kind of a chart of which symbol does what, and which symbols pays what amount.

Matching identical symbols on different paylines, won’t work. Ideally, you’ll be hoping to land five of the same symbols on a payline, although some slots can reward pay-outs for three symbols, and sometimes even two is enough to pocket a win.

3D slots tend to video slots. Very few 3D slots are of the classical genre. This means that they’ll also likely be equipped with special symbols. Such special symbols can include wilds, scatters and bonus icons.

Wilds can come in many different varieties, but they all have one thing in common. They all act as substitute symbols for other icons in the game.

Scatters count no matter where they are found on the reels. With scatter icons, you can pocket wins without needing to have them on any specific payline.

Bonus symbols on the other hand, don’t have to appear on a specific line. They may need to appear on specific reels, though. When they do, you’ll often trigger a bonus game, which takes place on a second screen. Some bonus games can actually be triggered via scatter symbols, though.

Bonus games in 3D slots will often contain far better graphics than in the base game. Once a bonus is triggered, it could consist of anything. Some bonus rounds consist of free spins games, and others are pick and win bonuses.

Most bonus rounds always take place on a second screen, and they are usually limited, either to a certain number of free spins or picks. Many 3D slots offer larger sums of cash in their bonus games, than they do in their base game. It is also not impossible that some bonus rounds can be triggered entirely at random.

BetSoft is the number one name for 3D slots. They are miles ahead of the competition. As well as 3D icons, BetSoft games often contain animated characters on the reels, too. If you’re interested in trying out some 3D slots, we’d recommend Greedy Goblins (if you fancy competing to win a progressive jackpot), WhoSpunIt (for really unique gameplay), Rook’s Revenge, True Sheriff or Under the Bed. These games are all top quality, and all highlight just how impressive 3D slots can be.

Now that you’re interested in playing 3D slots with Bitcoin, you just need to find an online casino which allows you to do that. We’d always recommend mBit Casino, since they are the best Bitcoin accepting casino, and contain some really superb 3D slot machine games.