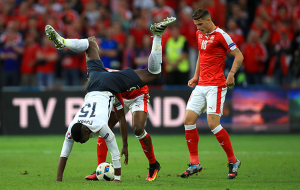 These two sides first met in 1904. Since then they played a total of 73 games against each other, the last one being a friendly in 2015. France have won 24 times and Belgium 30 times.

While some maintain that France were lucky against Uruguay who were missing a key player, others feel that they were solid defensively and played well enough in attack to secure a win. Uruguay had an early chance which forced a save from Lloris. But other than that, France controlled the match.

Belgium went into the match with Brazil with no fear and their tactics were rewarded with a fortunate Brazil own goal and then a brilliant second goal by De Bruyne. From then on they managed to halt the Brazilian comeback and managed to book a spot in the semi-finals.

Both teams will fancy their chances of making it to the finals. France has more depth in the squad, while Belgium have shown more in this World Cup. In fact, if you look at the stats, Belgium should have the edge here.

Going back on the throne

Twenty years ago, France beat Brazil in the final to win the World Cup. Now, with a young but extremely talented team, they are favorites to be World Cup winners again.

Matuidi is back from suspension and France will have all their players ready for the Tuesday match. Mbappe and Pogbahave been great for France, but we shouldn’t forget Griezmann who scored three goals so far and has one assist. Kante and Varane also stand out as the only two French players who played every minute so far.

With their improved defensive showing against Uruguay, they will have all the confidence in the world that they can beat a talented but slightly inexperienced Belgian team.

This time three years ago Belgium was ranked Number One in the official FIFA rankings. This team has been building up to this semi-final for the last couple of years.

Belgium will be without Thomas Meunier on the right wing as he will be serving a one-match ban after two yellow cards. However, Coach Martinez will use on of the other midfielders to try and replace him adequately.

Over their last five victories, Belgian players have showed us talent, organization, mental strength and defensive resilience which should provide the team with the confidence to defeat France and finish strong this year.

Experience from the World Cup so far tells us that there are no favorites. Still, France are favorites to win this match, but only by a small margin. However, Belgium will not see it that way and they will feel well prepared to defeat the champions of 20 years ago.

There are a lot of people who think that, whichever team wins this game, they will be the new champions. It’s clear then what kind of stakes are at play here. And both teams will be aware of them.

With teams looking to be unchanged from their respective quarter-finals victories, this is likely to be a tight and tactical match where one touch of brilliance from either side could win it.